Get charged up at home, on the road, or in the office!

A charging station puts all your devices in an easy-to-access place for charging.

Most people should buy the SIIG 90W Smart Charging Station. Why get this one? It can charge ten devices simultaneously, enough for most people and families.

Some things to look for in a charging station include the number of charging ports available, the types of ports, and the number of slots to hold your devices. All those cables can get messy, so a built-in storage area for cable length is also good. Also, pay attention to the available finishes so that the charging station can match your decor. 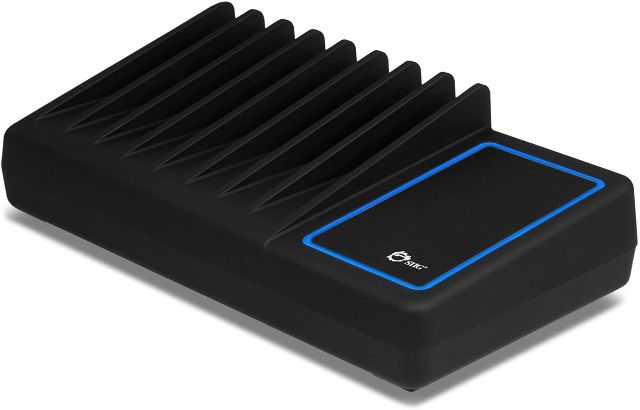 View On Amazon View On Walmart View On Antonline.com
What We Like
What We Don't Like
SIIG 90W Smart Charging Station Review

The reason this got our top pick is that people simply have more than one device nowadays. And if you have a family of three or more, you already know how many devices need to be charged at any given time. It has eight slots that can hold a smartphone or tablet, a non-slip deck for a phone or smartwatch, and 10 USB ports total.

Now, there’s no wireless charger in here, which is a real miss, and the slots are a bit narrow, so if you have a fat case around your phone there’s a chance it won’t fit (and any AirPods case won’t fit, either). That said, our testing found the slots do a good job of holding phones, tablets, and small laptops.

The SIIG Smart Charging Station is a beast of a device. This is my favorite pick because of the number of ports available and the organization involved—it'll help tame the tangle of cords. The charger's body feels light and flimsy, but the blue LED light that surrounds the non-slip deck is a nice touch, especially for anyone who wants to use this charger on a bedside table. The only real usability issue is that there's no internal cable management solution. That's common with this type of charging station, although this one is so massive, and feels so hollow, that it seems like there must be some extra space in there. Overall, it's easy to use, can fast-charge multiple devices at once, and it's available at an affordable price. Just make sure to buy some USB cables; they're not included. —Jeremy Laukkonen, Product Tester 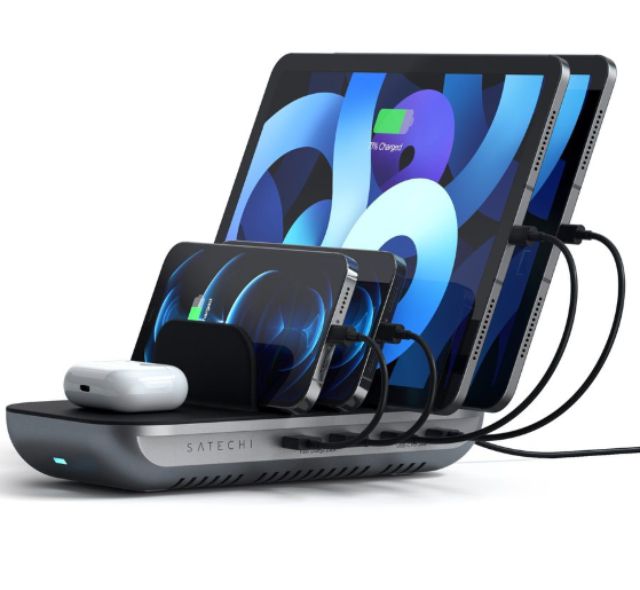 The Satechi Dock5 Charging station is one of our favorites on this list. There aren't a lot of ports, but the ports it has are powerful. You'll get 10W of wireless charging on the Qi pad in front. Each USB-A port outputs 12W of power each and the USB-C port's output is 20W each of power delivery. That's a lot of juice for this small station. It also has a small footprint so it doesn't take up a lot of room. This charging station does not include cables, which is something we'd like to see considering how expensive it is. 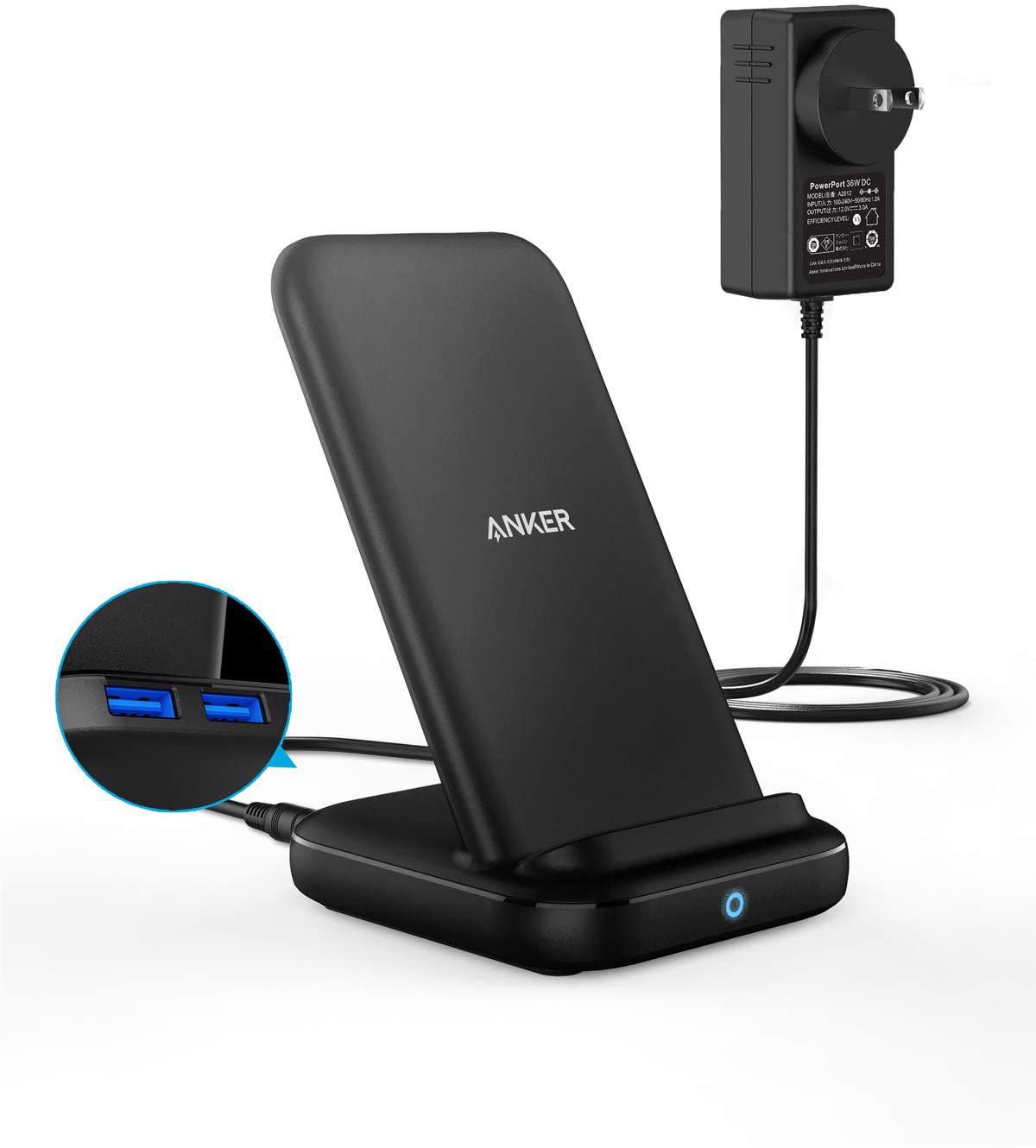 Anker has long been a leader in charging technology including wireless changing. The PowerWave 10 charging stand offers you the ability to charge up to three devices simultaneously. The wireless charger is rated for up to 10W of wireless charging, You can charge wirelessly with your phone either in the horizontal or vertical orientation, though some reviewers noted that a thick case can make charging a little hit and miss.

On the back, you have two additional USB-A ports so you can charge two other devices as well. The smart chip also protects against overcharging and over-current while charging. All this charging capability keeps things in a small footprint so it doesn't take up too much space at all. We'd like to see a USB-C port here in 2021, and the power brick on the cable is a little larger than we'd usually like. This is a small device that lets you work with your phone while it's charging, and we dig that.

The 2 Best Charging Cables for Androids of 2022 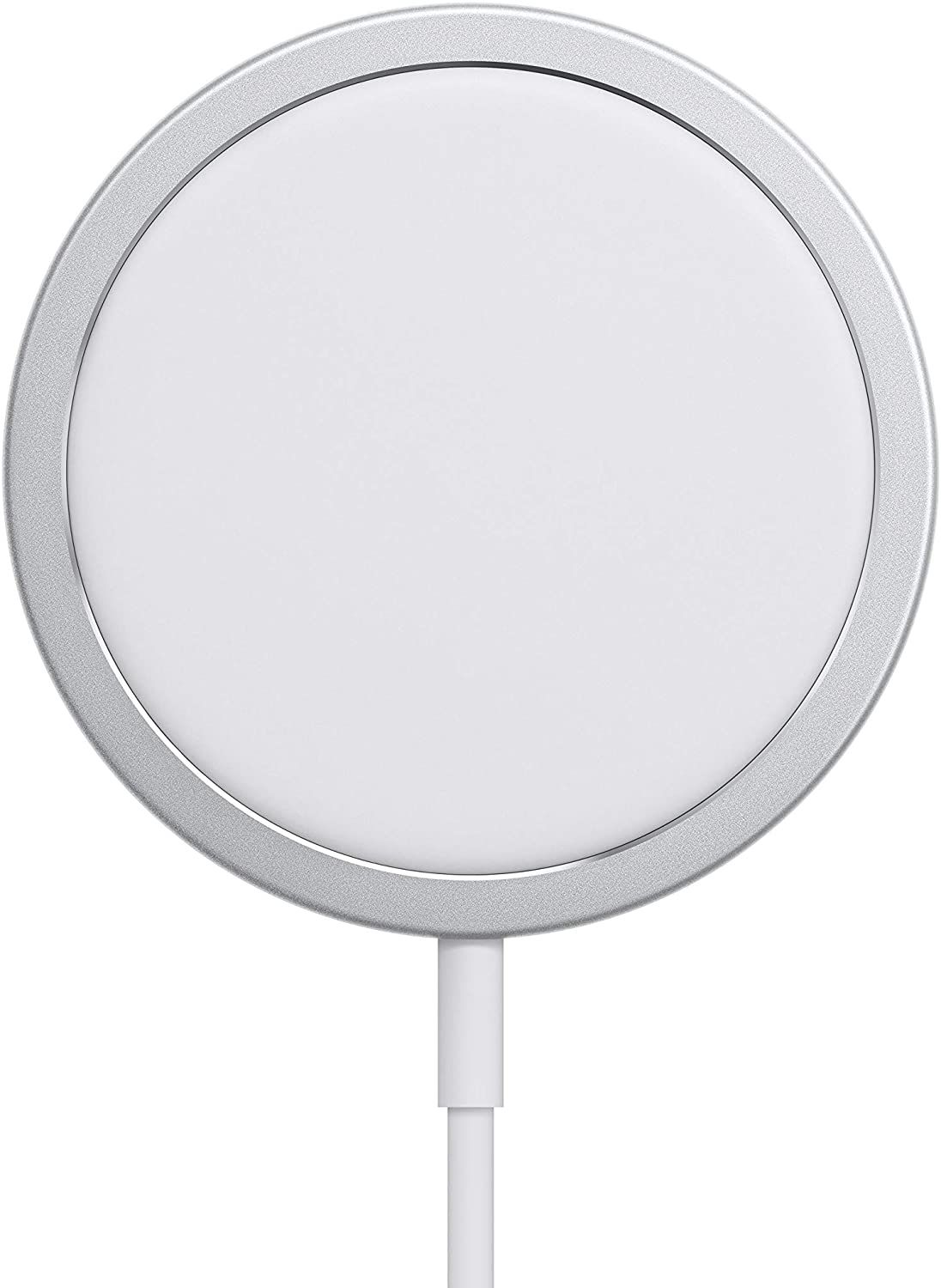 When the iPhone 12 debuted in the Fall of 2020, it came with a new charging concept called MagSafe. Simply snap it onto the back of the iPhone and it charges the device. It's small and easily portable.

The magnets secure the MagSafe charger to the back of the phone so you can't accidentally knock it off the stand. Plus, it uses Qi, so you can use it on any phone that accepts wireless charging (though there are no magnets to align the coils on other phones).

That's all pretty cool, but the MagSafe charger is really just a normal Qi charger with magnets. At $40, it's pretty expensive for what it is. But, if you don't mind paying the "Apple Tax" and you need a wireless charger for your iPhone, this is a good pickup.

Using the MagSafe is as simple as plugging it in and attaching your device to the pad. You can even still make phone calls while it's attached, which is something you can't do with many other non-magnetic wireless chargers. The MagSafe is faster than traditional Qi chargers, but it's still slower than using a Lightning or USB-C cable. During testing, an iPhone 12 reached 54 percent charged after one hour; it took over two hours to reach a full charge. The iPhone 12 Pro Max, which has a bigger battery, gained a full charge in under three hours. It's fast and effective, but it's also expensive compared to competitive chargers that provide more features. —Andrew Hayward, Product Tester

We Tested the Best iPhone Lightning Cables of 2022
Final Verdict

If you are looking to primarily charge phones and another gadget or two with a cable, SIIG 90W Smart charging station is excellent.

"Looks and aesthetics have their place, but users shouldn’t value design over function when it comes to their charging station. Battery technology today has allowed industry leaders to dramatically alter the size of power stations, but at the end of the day, the larger the battery, the more power it provides." — Jason Wong, Founder and CEO of omnicharge

What to Look For in a Charging Station

If you only expect to charge a few devices at a time—like an iPhone and an Apple Watch—it’s worth checking out options that look great, too. If you want more versatility, opt for a more generic model that’s capable of holding several differently-sized devices and comes equipped with a bunch of charging ports.

Look for a charging station that supports Quick Charge if you have an Android phone that’s capable of taking advantage of the extra power. If you have an iPhone that supports fast charging via USB-PD, a lot of great options also support that standard. Before you buy, check to see if a unit’s capabilities fit your needs.

Even if none of your devices support wireless charging just yet, it could pay off to invest in a charging station that does. If this seems like an interesting feature, choose a model that has a variety of traditional charging ports in addition to a wireless charging pad.

Jeremy Laukkonen has been writing for Lifewire since 2019. He has a background in trade publications and auto mechanics, and he's reviewed a wide range of devices for Lifewire including phones, laptops, speakers, TVs, and more. He liked the SIIG charging dock for its numerous ports and even distribution of power, but he did wish it offered wireless charging.

A former editor of Lifewire product round-ups, Emmeline Kaser has years of experience researching and writing about the best consumer products out there. She specializes in consumer tech, including charging stations like the ones featured on this list.

Andrew Hayward is a Chicago-based writer who has been covering technology and video games since 2006.His areas of expertise include smartphones, and he reviewed the Apple MagSafe Charger on this list.

Adam Doud has been writing in the technology space for almost a decade. When he's not hosting the Benefit of the Doud podcast, he's playing with the latest phones, tablets, and laptops. When not working, he's a cyclist, geocacher, and spends as much time outside as he can.