Jason Schneider
Writer
Jason has been writing for tech and media companies for nearly 10 years. He is also a current and past contributing writer to Greatist and Thrillist.
our editorial process
Jason Schneider
Phones & Accessories

The Rundown
Best Overall:
weBoost Home 4G Signal Booster at eBay
"The biggest name in the game when it comes to cell phone signal boosters."
Best Design:
SureCall Flare at Amazon
"Capable of covering up to 2,500 square feet in a home or office."
Best for Large Spaces:
weBoost Connect 4G-X at Amazon
"Provides the best, most stable talk, text and data environment for your business."
Best for Medium Spaces:
SureCall Fusion4Home at Amazon
"Covering up to 3,000 square feet."
Best Splurge:
SureCall Fusion 5X at Amazon
"The cream of the crop (with the price tag to match)." 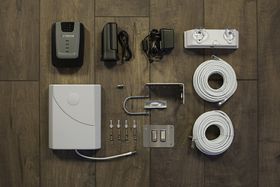 weBoost is sort of the biggest name in the game when it comes to cell phone signal boosters, so it was a natural choice for our top spot here. The 4G Booster for 1,500-square-foot spaces is the classic signal booster for anyone looking to step up their signal in a few rooms (perfect for home offices or apartments). It offers the most basic of functions since it just boosts the already existent 4G LTE signal in the spaces, and it’s compatible with all major U.S. carriers, including Verizon, AT&T, Sprint, Straight Talk and more.

They claim it boosts the signal, both 4G and 3G, up to 32 times as strong as what it was before, which means fewer dropped calls and fewer spinning loading wheels. An added side benefit is the extension of battery life, which weBoost states you could get up to two additional hours of talk time just because your phone isn’t hunting for one or two bars of signal.

The unit is also optimized for audio and video streams, which prevents drops on your entertainment. Just install the outdoor antenna to pull in the existing signal, connect the coax cable to the indoor receiver and connect an indoor antenna for further stability inside. It’s as simple as that, and then you’re ready to rock. 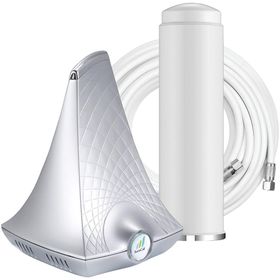 4.5
Buy on Amazon Buy on Walmart Buy on Home Depot

When not having a cell phone signal just won’t do, turn to the SureCall Flare Cell Phone Signal Booster Kit. Capable of covering up to 2,500 square feet in a home or office, it’s a smart solution to an annoying problem. Compatible with all 4G LTE frequencies in the US, the booster will support AT&T, Verizon, Sprint and T-Mobile. Coverage for voice and text will benefit from the signal boost as much as data does. Up to eight simultaneous users are able to connect and utilize the increased signal at a time. Manual gain adjustments are utilized to specifically boost a wireless band for amplification.

While most networking equipment tends to be more function than design, the Flare is a combination of both. The plastic shell adds a clean look that fits in easily on a bookshelf or any corner in an office. The outdoor omnidirectional antenna, on the other hand, is designed to be functional over all else. Once activated, online reviews praise the significant reduction in dropped and missed calls.

This weBoost 4G-X is an insane workhorse that offers a range so massive that it’ll work for large homes, outdoor boosting and even a small office space. So, if you’re looking for something to support your startup business, this could be the unit. Just like the smaller range units, it offers up to 32x stronger cell signal for all major providers, including Verizon, AT&T, Sprint, T Mobile, US Cellular, Straight Talk, and more. It’ll work great for all major cellular connected devices, from phones to tablets to hot spots, even to data-connected notebooks.

The range offers extension is up to 7,500 square feet and it connects via the same method of an outdoor antenna, daisy-chained through the coax cable, to the indoor receiver along with an indoor antenna. This premium, large-space model also offers a unique additional bit of technology called an Automatic Gain Setting that reads the signal condition in and around the building, determines how strong it is and then electronically optimizes the boost needed. It all provides the best, most stable talk, text and data environment for your business.

3.8
Buy on Amazon Buy on Walmart Buy on Home Depot

Covering up to 3,000 square feet, this SureCall Yagi/Whip package is perfect for a medium-sized home. It offers you a clear and consistent signal, boosting from the service you already have, for up to 4G LTE, plus calling and texting on Verizon, AT&T, Sprint and more. This will all contribute to less dropped calls, fewer texts not getting through and less waiting for Netflix buffering.

The kit contains an outdoor directional yagi antenna for hyper-accurate signal grabbing, an indoor whip antenna for transmitting it inside, a 50-foot RG-6 coax cable to connect it up and an AC power supply. The units are built with a sturdy metal construction and have a three-year manufacturer’s warranty just in case something does go wrong. It works by collecting the outside signal via the Yagi antenna and sends it inside to the Whip. When you want a strong signal sent out, it works in the reverse, funneling your data through the Whip, out to the Yagi and back to the cell tower. 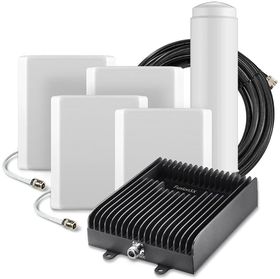 Buy on Amazon Buy on eBay

The SureCall Fusion 5X is the cream of the crop (and has the price tag to match). It comes with a proprietary omnidirectional antenna that goes outside and pulls signal from all directions, so there will be no shortage of signal to boost. It also comes with four internal panel extenders that carry the signal inside the home. The range is a completely head-spinning 20,000 square feet, so you’d be able to power a full factory or a super large estate. It supports talk, text and 4G LTE from the major carriers including Verizon, AT&T, T Mobile and more. On top of that, the receivers inside are SureCall’s first units that don’t have knobs or explicit controls. That’s because the dB and gain optimization happens automatically (you don’t need to figure out the right signal level to work with your space ​because the device will read the signal and extend it the correct amount on its own).

What to Look for in a Cell Phone Signal Booster

Wireless vs. cradle - Some cell phone boosters are wireless, and others use a cradle. Wireless models tend to be more expensive and are capable of providing a stronger signal to multiple devices at once, while cradle signal boosters only amplify the signal to one connected phone.

Band coverage - Cell phone carriers use a number of bands with different frequencies, and you need to choose a booster that’s compatible with yours. The best cell phone signal boosters cover five bands in addition to 4G, but it’s okay to go with less coverage as long as the bands used by your carrier and phone are covered.

﻿Signal strength - Cell phone boosters are available with both high-gain and low-gain antennas. Look for a booster with a high-gain antenna that’s at least 5dBi if you live in a rural area with no nearby cell towers, and a lower-gain antenna if the signal is obstructed by terrain or buildings.