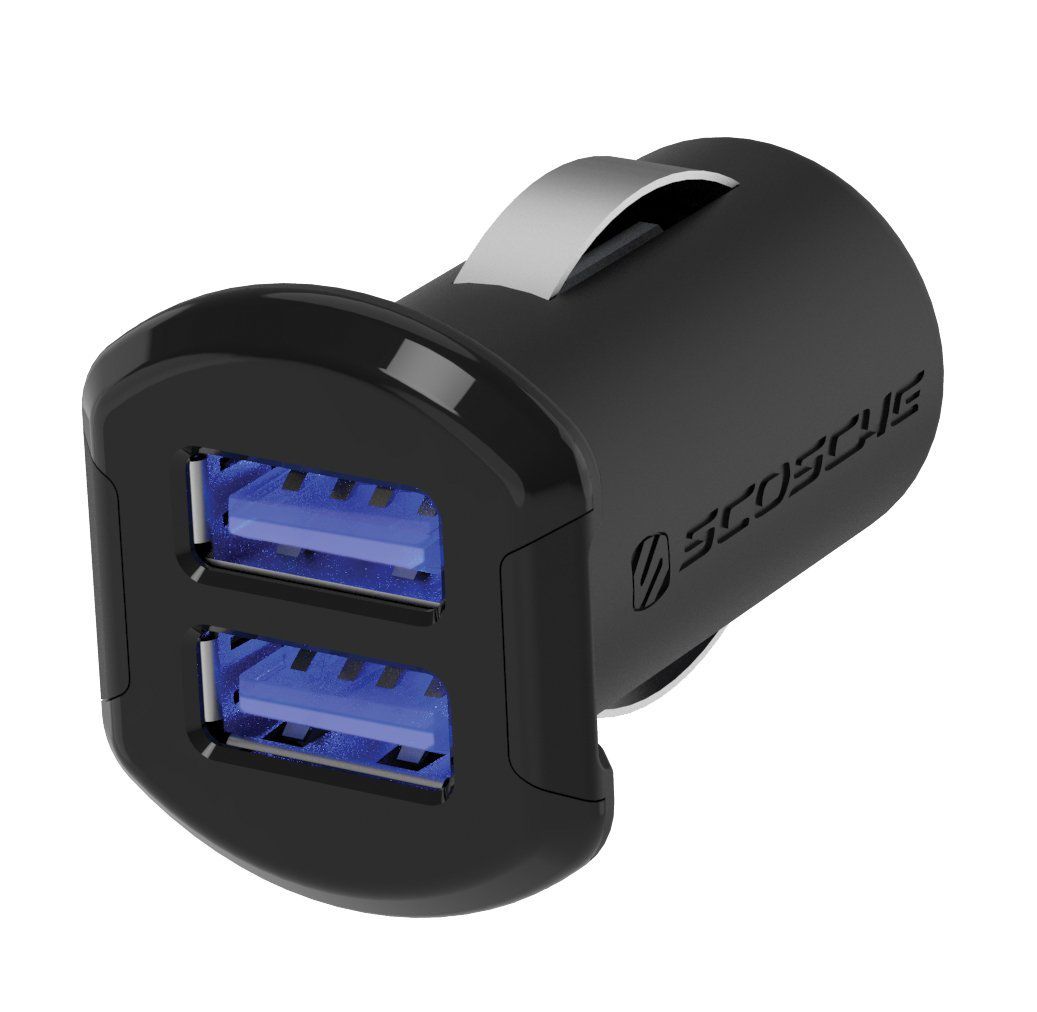 When it comes to charging your smartphone (or other electronic gadgets) in your car, look no further than the Scosche reVOLT. The compact size supports two USB 2.4A (12W) of power, which offers enough power to charge two full-sized tablets at once. The higher output also means you’ll get a slightly faster charge over standard car chargers. The Scosche measures just under 2 inches and is slightly smaller than the height of a credit card. If we had to offer any gripes about this model, it would actually be one that is reserved for all car chargers, regardless of price or manufacturer, one-way insertion. Unlike Apple’s lightning charger, standard USB ports still only accept cables in one direction. It’s a frustration, but given how widespread this is, it’s hardly a deal breaker.

Although a good number of cars being produced today offer USB integration, the charging speed of a vehicle charger only offers about 1 amp of output, which is not enough to keep up with a modern-day smartphone trickling out battery life while using Apple or Google maps. In this scenario, you’re likely going to end up at your destination with a battery that was less charged than when you started. At just .8 ounces, the Scosche offers a product that will charge your smartphone at the same speed as your wall charger. The inexpensive price, trusted name, small frame and glowing blue ports that make it simple to plug in when dark make the Scosche an easy recommendation for our top pick. 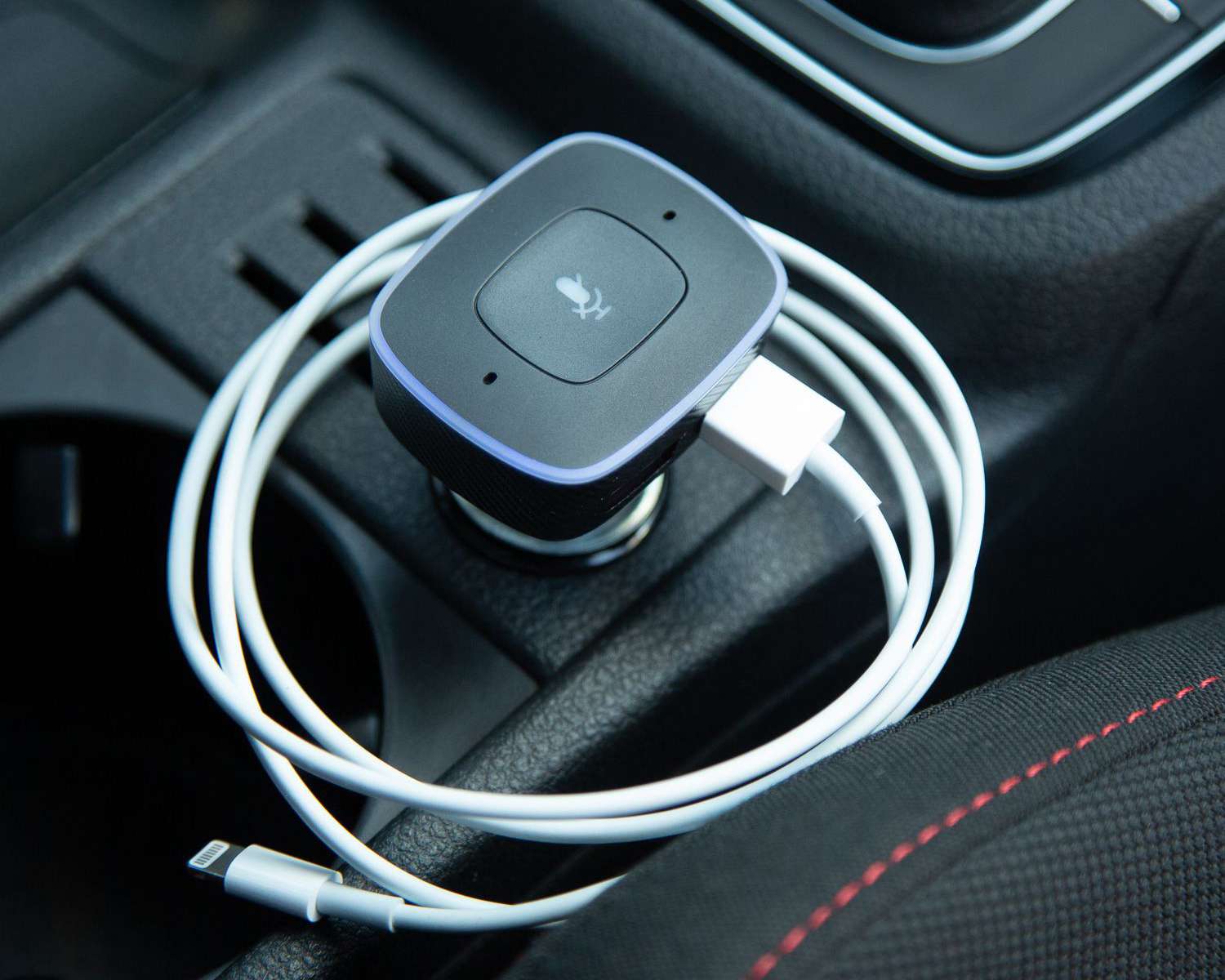 The Roav VIVA is certainly one of the pricier option on the list, but that’s because it’s more than just a charger. This little device is actually an Alexa-enabled smart accessory, and it brings a whole new level of control to your in-car entertainment and navigation experience. Simply plug it into your console outlet, connect it to your phone via Bluetooth and instantly get directions, make phone calls, stream music and more, just by asking Alexa. The Viva’s built-in Acoustic Echo Cancellation technology is able to isolate your voice from the background and accurately pick up on what you say. And for those times when you don’t want Alexa listening, just press the single mute button on top of the charger to shut off the mics.

But this device is still a charger at its core, and when it comes to speed and power, the Viva is one of the best. Its USB ports are created with Anker’s patented PowerIQ technology, bringing your devices up to full battery with lightning speed. And the dual-port design means both you and your passenger can plug in simultaneously. 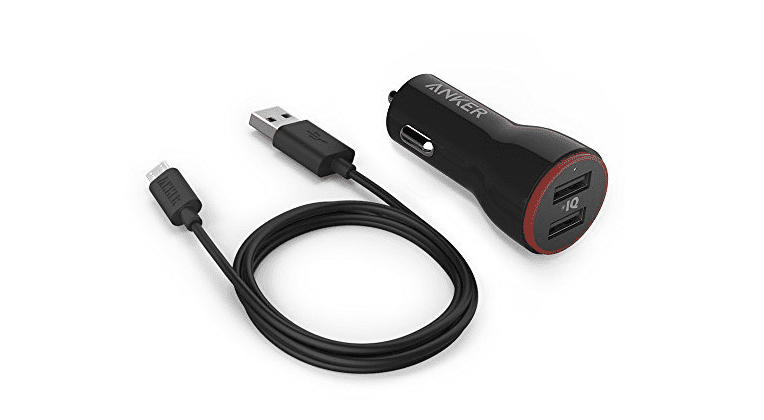 Courtesy of Amazon.com
View On Amazon View On Walmart View On Anker

Each USB port supplies 2.4 amps of juice, which allows for charging two devices (smartphones, tablets and even Macbooks) at the same time. Weighing just 1.6 ounces and measuring 3.4” long, this model happens to be on the “larger” size compared to the rest of our top picks.

There are no bells, whistles, GPS location, but the 3-foot long cable is long enough to stretch to the back seat. If you’re looking for something that’s basic, budget-friendly and ready to go, there’s little question that you should wish list this Anker 24W Dual USB Car Charger PowerDrive 2 model right away. The lightweight, low-profile and out-of-the-way design make this choice a steal, and we’d recommend picking it up just to have an extra car charger lying around the house, if nothing else. 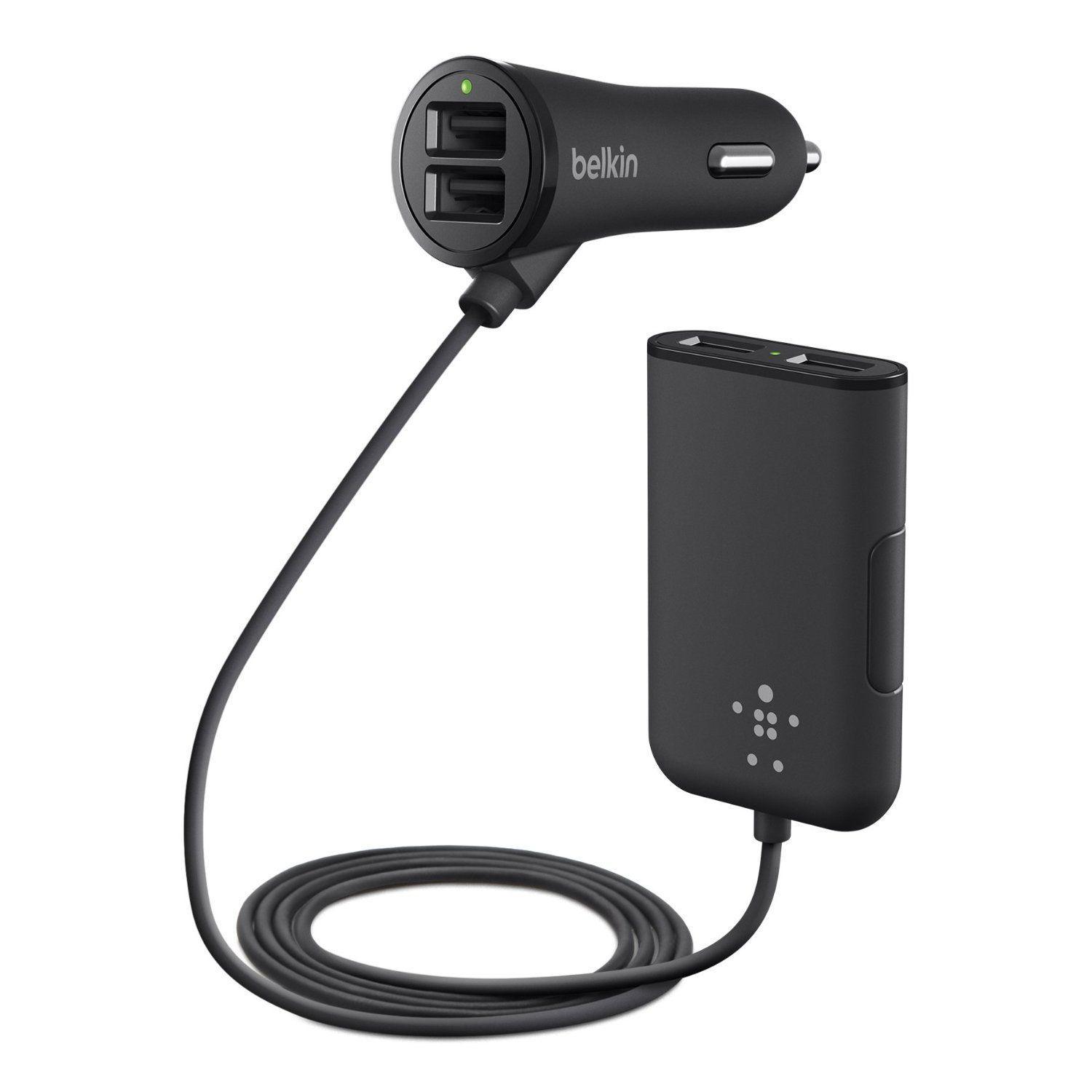 The Belkin Road Rockstar is our vote for the best backseat charger. This 7.8-ounce product has a combined 2.4A in the front and two separate 2.4A openings for the backseat via an extendable USB hub. Combined, those two separate hubs means that everyone has charging options.

When designing the Rockstar, it’s likely Belkin had tablets in mind as the backseat chargers are designed more for tablet use, thanks to increased 2.4A separate USB ports. It’s perfectly OK to charge smartphones as well, but the original intent was clearly focused on rear-seat passengers boosting battery life on tablets. It would have been ideal for the Belkin to consider the higher-amp in the front passenger charging capacity as well, rather than separating the 2.4A between the two USB ports offering up a slightly slower charging time.

Aside from charging capacity, the Belkin includes a six-foot cable offering more than enough line to clip to a backseat car pocket. There’s also a three-meter double-side adhesive included if you have considered a more permanent charging option for rear-seat passengers.

With blazing 65W rapid charging that supports up to six of your devices, there’s no better car charger for your family than the Jelly Comb. One of it’s most unique features is its smart identification technology that recognizes your device and distributes the maximum charge current possible with its 2.4A per USB output.

The Jelly Comb is built for families in mind. It’s made with an industry grade material with premium circuitry that makes it both reliable in safety and performance. Kids in the backseat don’t have to worry about stretching, as the Jelly Comb has a 3.3 feet adapter cable to make sure everyone can get their charge on. Don’t worry about compatibility issues either – the Jelly Comb offers universal compatibility with all USB powered devices (the iPhone, Samsung Galaxy, tablets, sports watches and more). 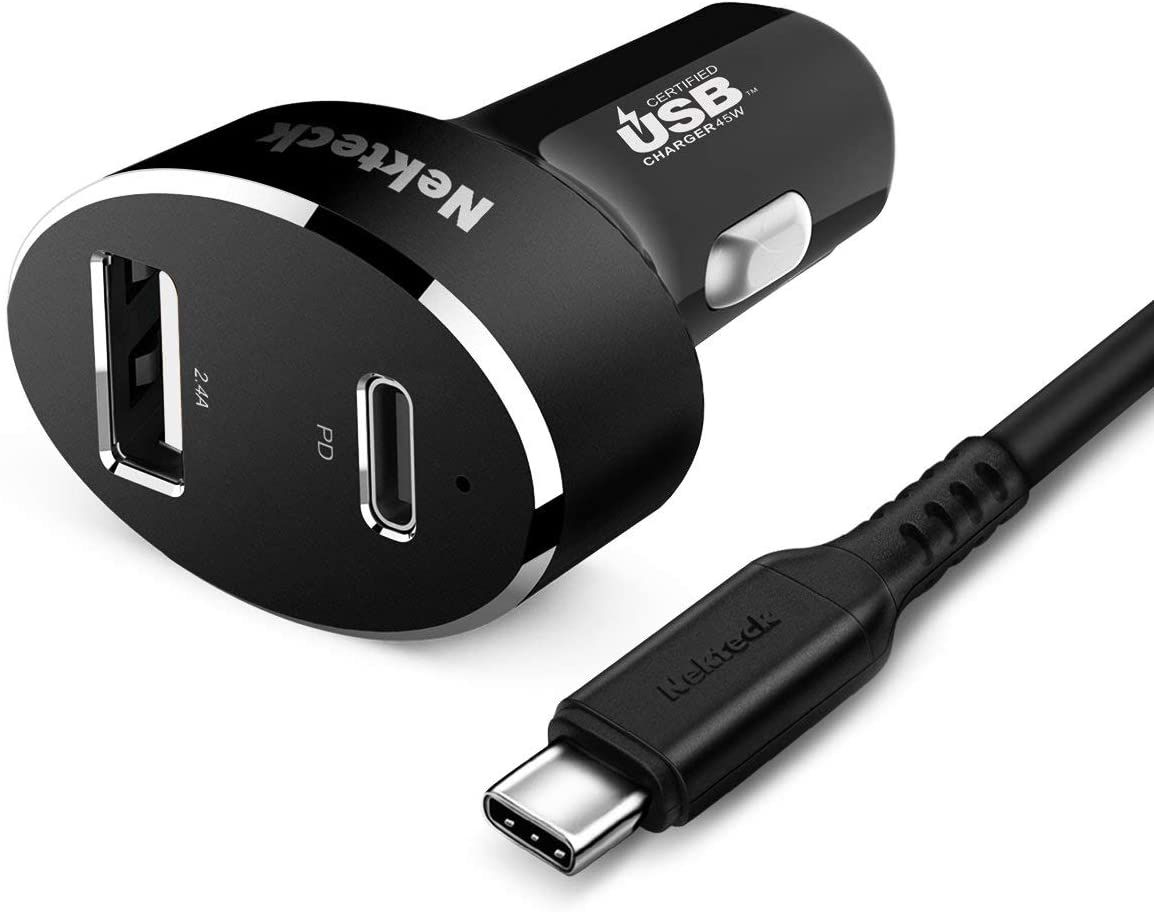 Whether you’re a road warrior or a student needing a quick charge, the Nektech is equipped with a Type C input port for fast-charging the new iPhone models or Samsung's latest Galaxy series of devices. Beyond the smartphone, the Nekteck is also the first USB IF certified charger that delivers up to 45 watts of power and 12A which is enough wattage to safely handle charging Apple’s latest 12-inch MacBook lineup, the MacBook Pro, Nintendo Switch, the Chromebook Pixel, Dell laptops or tablets at their highest charging capacity. Universally compatible with the USB-A port, the Nekteck properly identifies the type of device (whether it’s a laptop, tablet or smartphone) and delivers the appropriate amount of charging power without risk of overcharging or overvoltage. Made from fireproof materials for extra safety in the car, the 2-in-1 Nekteck is a one of a kind car charger with lots of functionality.

What to Look for in a Car Charger

Detachable USB cable - Some USB car chargers come with a built-in USB cable, which is convenient because then you don’t need to worry about losing your charging cable. It’s still better to go with a charger that has USB ports or comes with a detachable cable, so you can charge USB-C, micro USB, and mini USB devices instead of just a single type.

Multiple charging ports - One charging port might be enough to get you by, but there’s no reason to stop there. Most of the best car chargers include at least two USB ports, and some even have four or more. This allows you to keep all of your devices charged at once without swapping cables all the time.

Fast charging - Having multiple ports isn’t enough; the charger needs to be able to feed enough power to each port. Look for a car charger that can supply 2.4A to at least two ports simultaneously. If you have a phone that supports quick charging over USB-C, some phone chargers have a special port for that as well.