Wearable technology to record all that's happening around you

While the best body cameras have certainly become more commonplace among law enforcement, there are plenty of good options available for the civilian market as well. Many states and cities have laws allowing body camera footage to be admissible in court, which has made them popular among anyone who may need to document their version of events. Body cameras can also be used for generic recording and live streaming.

The best body cam should have a durable, compact design, good video resolution, and long battery life so it doesn't need to be frequently recharged. Since body cameras are frequently used by outdoor adventurers, sports enthusiasts, and law enforcement, durability is particularly important and a waterproof and shock resistance rating is important to consider. If you're in a car, take a look at our roundup of the best dash cams. Here, read on to see the best body cams to get for any purposes. 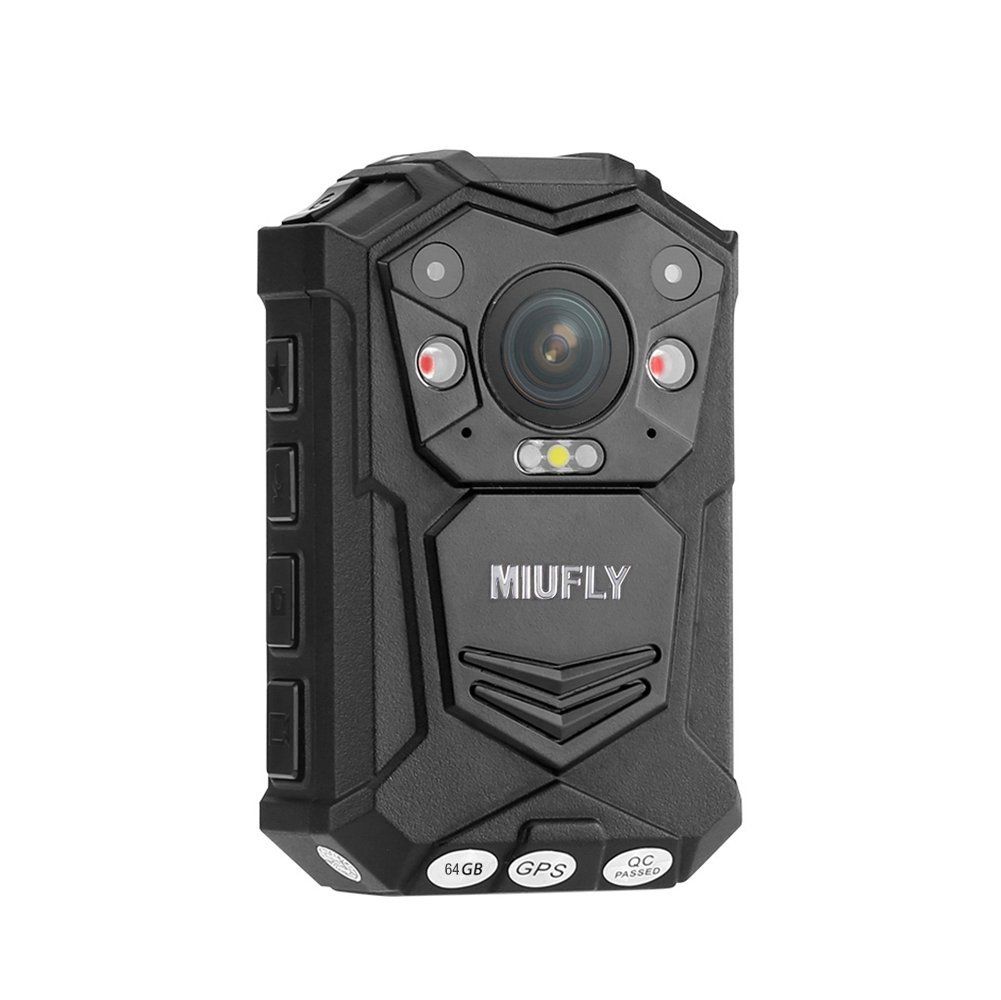 Having a robust design, powerful audio-visual data recording capabilities, and a host of other features, MIUFLY 1296P is easily the best overall body-worn camera available. Equipped with a 5MP CMOS sensor, MIUFLY allows high video capture in a variety of resolutions, ranging from 848 x 480p (30/60fps) to 2304 x 1296p (30fps). The camera lens has a 140-degree viewing angle and up to 16x digital zoom. Videos are encoded using the H.264 compression standard and saved in MP4 format. The camera utilizes its integrated microphone to record audio in WAV format, and can even capture photos while recording video. MIUFLY 1296P can embed useful information like User ID, Time & Date stamp and GPS coordinates (as a watermark) into recorded videos.

Thanks to a motion-detection feature, the wearable camera can automatically start video capture on detecting activity. A two-inch (240 x 320 pixels resolution) LCD lets you view captured videos, and you can set a password to prevent recorded data from being stolen/deleted. The device has four infrared LEDs for capturing videos in dark environments. MIUFLY 1296P comes with a 2,900mAh rechargeable battery, allowing up to 10 hours of footage to be captured in one go. 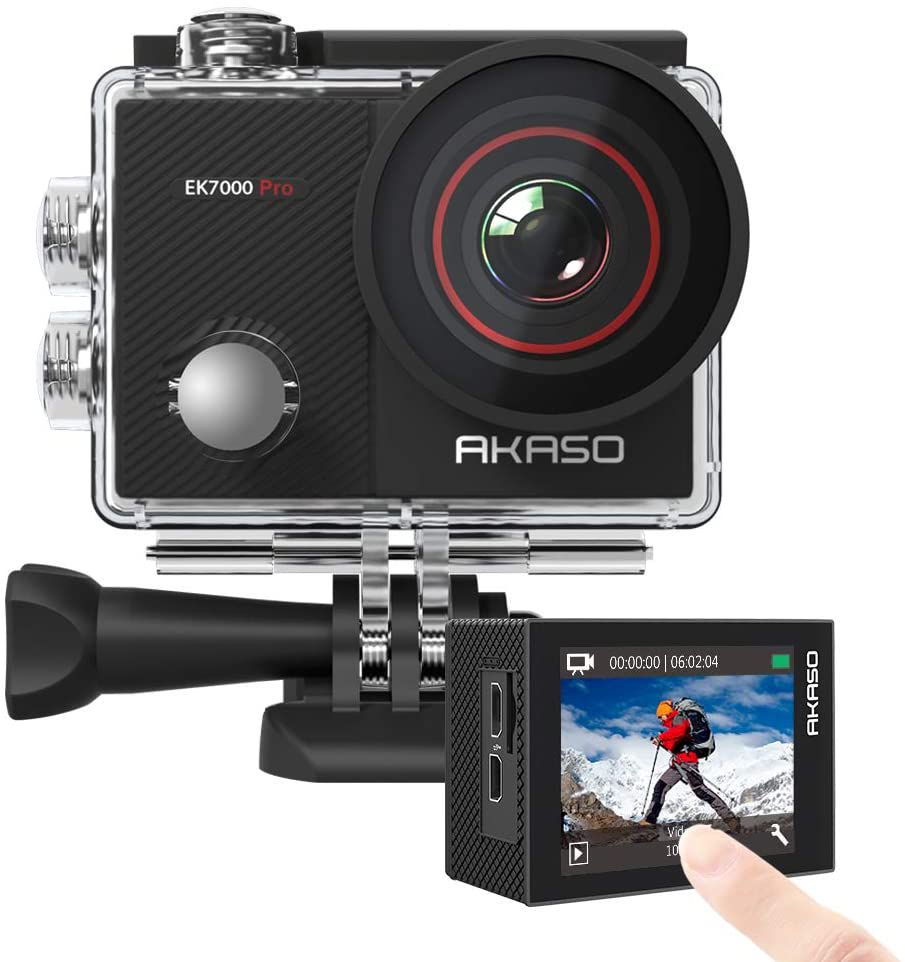 All told, the body cam category isn’t that different than the more general action cam category. Buyers of both want good performance no matter what activity they're participating in — whether it’s for safety or just for documenting a hike. Of the budget action body cams that do exist, the AKASO EK7000 is one of the most affordable, and best of all, it doesn't require that you sacrifice a whole lot of functionality in the process. At 4K, for instance, it can shoot video at 25fps, and up to 30fps at 2.7K (still a formidable resolution). These numbers are leaps and bounds ahead of hyper-specific body cams.

The EK7000 also has electronic image stabilization built-in, though according to our reviewer probably get better action performance if you go for a camera with optical stabilization. That said, it can still shoot while submerged up to 131 feet underwater, meaning it doesn't have to be relegated to landscapes. One drawback for body cam users, however, is its roughly 90-minute footage cap. Anything over that and you'll be reaching for the charger. But because it only weighs about two ounces, it comes with a ton of accessories right in the box. And when you consider its Wi-Fi streaming and sharing integrations, it turns out to be a leading contender for the title of best body cam 2019 has to offer.

"Every shot, even with a wildly shaking camera, was crystal clear, the kind of clarity you could never get from a similarly priced point-and-shoot camera." — James Huenink, Product Tester 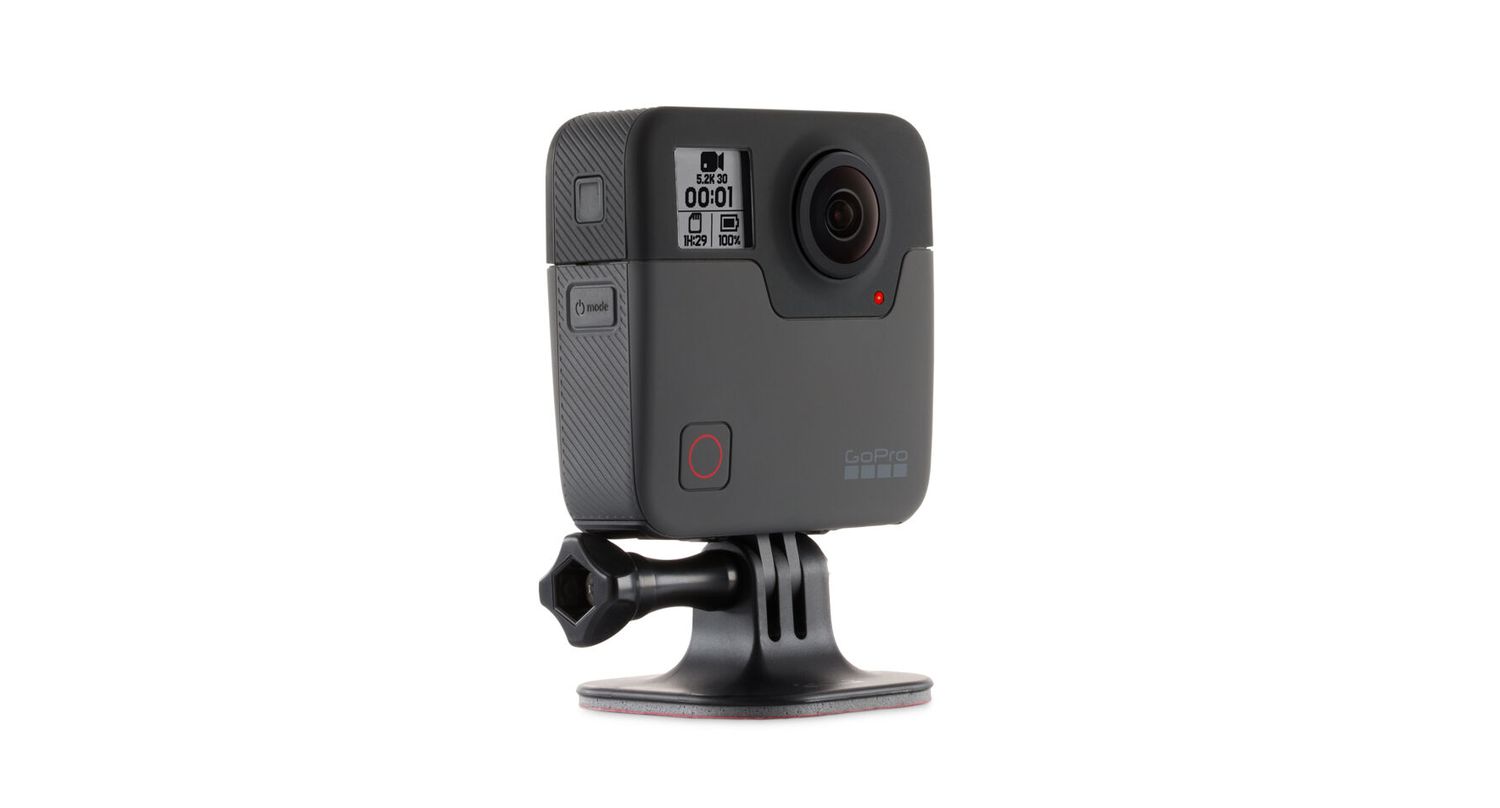 Action cameras can be considered as special purpose body cams. They allow users to record their outdoor adventures while being immersed in them. When it comes to action cams, GoPro is a name that needs no introduction. If money is no object, the Fusion is the best body worn action camera that you can get.

GoPro Fusion lets you capture immersive 360-degree videos in an astounding 5.2K (30fps) resolution. You can record 3K resolution videos at 60fps, as well as take 18MP spherical photos (at up to 30fps in burst mode). The spherical videos can be played back in VR, and the "Overcapture" feature makes it possible to convert 360-degree footage to standard 1080p videos from any angle, using the GoPro companion app. Speaking of the app, it can be used for creating short clips from the captured footage, posting your favorite photos and videos directly to Facebook, Instagram and Twitter, and even update the Fusion's firmware. With a total of four microphones, GoPro Fusion can record crystal clear audio. It also has advanced video stabilization capabilities. For connectivity, GoPro Fusion features Wi-Fi and Bluetooth. GPS is also included in the mix. 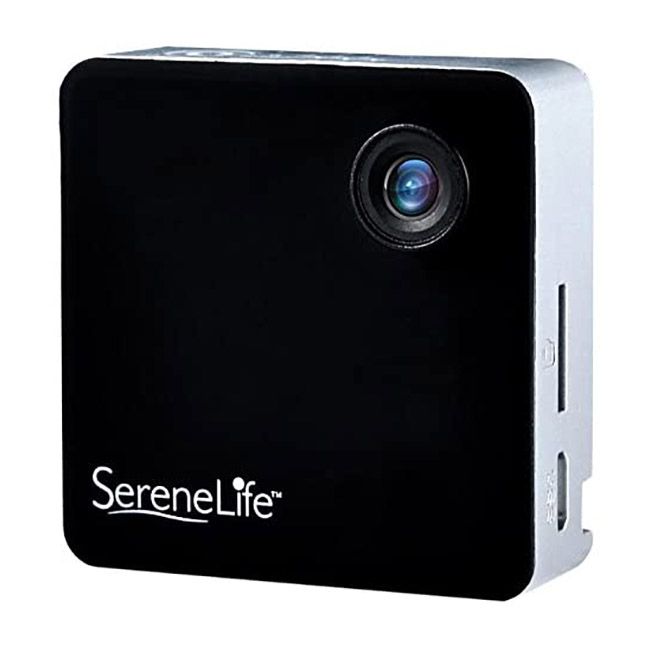 If you’re looking for a compact camera that can clip right onto your body, the SereneLife clip-on wearable camera is the answer. Measuring a mere 2 x 0.6 x 2 inches and weighing just 1.44 ounces, there’s no question this body camera is compact. Fortunately, its diminutive size belies its feature set. Capturing Full HD 1080p video, the camera’s recording quality is standout. Video might be its main purpose, but there’s also room to capture 12-megapixel pictures. Both pictures and video are stored on a separately-purchased microSD card. The length of each recording is determined by the card size, but the camera supports AVI formatting which compresses video into a smaller size for maximized storage.

For quick playback, a 1.8-inch display will let you view real-time picture and video. You can also review videos on a downloadable app on your mobile device. Just attach the camera to your clothing using the included clip and start recording. 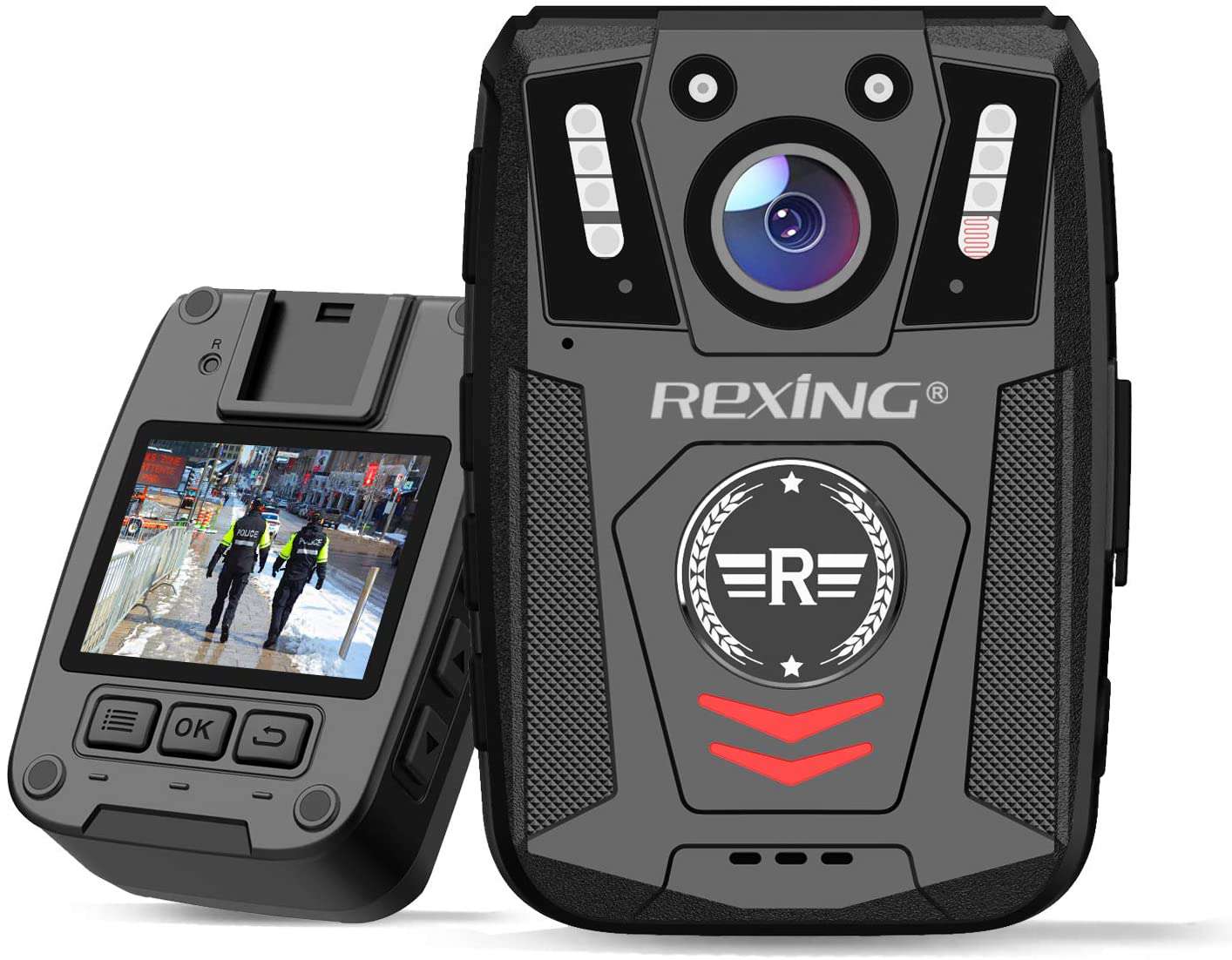 The Rexing P1 is a durable body camera that's ideal for law enforcement. It boasts a 1080p FHD camera, and 21x optical zoom that supports night vision capabilities. It can capture crisp footage up to 50 feet in the way even in dark conditions. There's 64GB of built-in storage for recording video, photos, and audio. Battery life is solid, with a 3,000mAh battery that should allow 10 hours of video recording, more than 11 hours of audio, or 20 hours of standby time. It should let you use the camera for the average work day without needing to recharge.

Other features include password protection, that encrypts files so they can't be stolen or deleted. The only way to delete any files is by connecting through a computer with a USB cable. Perhaps the biggest selling point is the IP67 waterproof rating, meaning the camera can survive complete submersion underwater. It's also shock-resistant, so it can withstand drops, bumps, and scrapes.

The best body cam is the MIUFLY 1296p HD (view at Amazon). It's a durable body camera that can take high-resolution video for up to 10 hours. It also can embed many kinds of useful information when capturing photos, like GPS location and time and date stamps. For more sports-oriented users we like the AKASO EK7000 Pro 4K Action Camera (view at Amazon). It shoots 4K video at 25fps and has great image stabilization.

Rajat Sharma is a tech writer whose writing has appeared on sites like I Love Free Software and Beebom and he's written for, ZEE Media Enterprises Limited and The Times Group.

James Huenink has been writing for Lifewire since 2019, covering a wide range of consumer tech including action cameras and accessories.

What To Look For in Body Cams

The key things you'll want to have in a body cam is a resolution and video quality that's crisp and smooth. The most standard resolution is 1080p at 30fps, which should give you good, smooth recording without breaking the budget. You can step up to 60fps if you want even smoother recording (or slow down to 24fps for slow motion effects). Above that, you get 4K usually at 30fps, which is much sharper, but that results in a corresponding increase in price.

As with anything that gets worn and carried around with you all the time, durability is hugely important for a body cam. If you're in law enforcement, you'll want something that's MIL-STD 810G, a certification that promises lab-tested shock resistance, drop resistance, and more. A waterproof rating is also important, with IP65 meaning the device is protected against submersion in water up to 5m and also resistant to dust. There are higher and lower IP ratings, with IPX ratings meaning no dust resistance and just water.

A body cam can't be easily recharged if you're wearing it around all day, so battery life is important. The size of the built-in cell can vary, with 1,000mAh to 3,000mAh being standard. Ideally, you'll want a device that can take you through an 8-hour workday. Most body cams likely won't be able to last a full 24 hours, since the size of the battery needs to be balanced against the compact and lightweight design. One option is to get a body cam that has more than one battery so you can swap them out when one runs out of juice.