The best Blu-ray players can handle Blu-ray disc playback, DVD playback, and CD playback, while also supporting hi-res audio and 4K content. You can even find models with Wi-Fi streaming, which is an added perk that can make your Blu-ray player an integral part of your home theater. Design is also something to consider. If you live in a smaller apartment with a cramped living room setup, you'll want a fairly slim device. With the right Blu-ray player, you can have all of your movie and TV needs fulfilled by one device, eliminating the need for separate devices for streaming, playing the content you have on disc, and playing content you have stored on a USB device.

The Rundown
Best Overall:
LG UBK80 at Amazon
Can play movies in 4K and HDR, plus it has a USB port for playing content from an external device.
Best Dolby Vision:
Sony UBP-X700 at Amazon
Provides dual HDMI ports and a gorgeous 4K picture, along with upscaling for non-4K TVs.
Best Streaming:
Sony BDP-S6700 Network Blu-ray Disc Player at Amazon
This Sony Blu-ray player is one of the more feature-rich options available.
Best Compact:
LG BP175 at Amazon
Its low price point and other features make up for the lower resolution picture.
Best Wireless:
Sony BDP-S3700 at Amazon
Additional capabilities include playback of still images, video, and music stored on USB flash drives or other compatible devices.
Best High-End:
Panasonic DP-UB9000 at Best Buy
A powerful 4K Ultra HD Blu-ray player with everything you need for a full home theater setup.
Best Mid-Range:
Sony UBP-X1100ES at Amazon
The Sony UBP-X1100ES is a solid Blu-ray player that works well with the latest apps and streaming services.
Most Versatile:
Sony UBP-X800M2 at Amazon
The UBP-X800M2 has everything you’d expect from a Blu-ray player and much more.
in this article

If you have an existing library of Blu-ray movies, or if you have several movies stored, the LG UBK80 will be a good addition to your theater room. It can play movies in 4K and HDR, plus it has a USB port for playing content from an external device. On top of all that, if you have a 3D TV, you can enjoy 3D movies at home with the Sony UBK80.

This Sony Blu-ray player can play CDs and DVDs in addition to Blu-rays. It supports numerous formats, including AAC, MP3, MP4, and several others, and it has an Ethernet port on the back. The Ethernet port is only for performing firmware updates though, and this player doesn’t have Wi-Fi connectivity. So, you won’t be using this player for streaming.

On the plus side, UBK80 boasts a slim design, measuring less than two inches in thickness, so it can fit in just about any space. You also get a remote with batteries included. This is a simple, yet elegant Blu-ray player that serves its purpose without all of the extra bells and whistles. 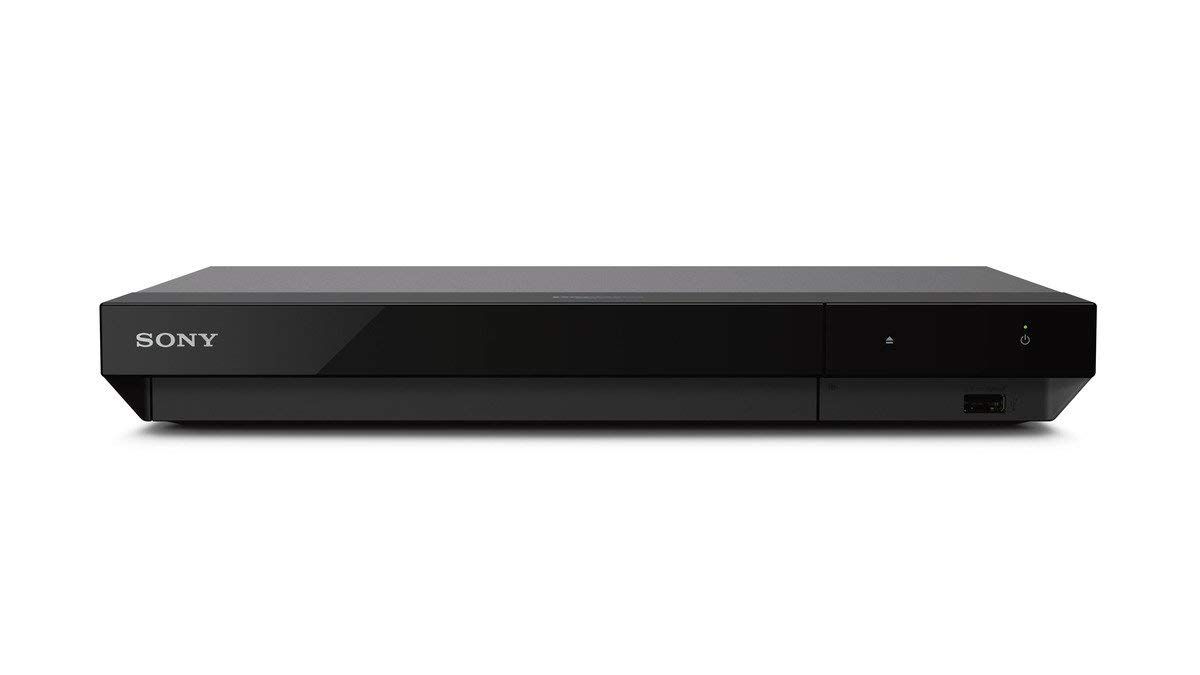 
If you want an all-in-one device that can play Blu-ray discs, DVDs, CDs, digital music, and streaming video content, the Sony UBPX700 might just be for you. It provides dual HDMI ports and a gorgeous 4K picture, along with upscaling for non-4K TVs. For someone looking for an affordable way to get a sharper image on their TV, this player offers SDR conversion along with the functionality of a smart Blu-ray player.

You can stream your favorite shows and movies from platforms like Netflix, Hulu, and Amazon Prime because the receiver has built-in Wi-Fi, so you don’t need a separate streaming device. There’s an interface where you can access different applications and features, and you can stream in 3D, 4K, or even live stream. A screen mirroring feature is available for watching content from your phone on a larger screen, and the player supports hi-res audio for clean and powerful sound. 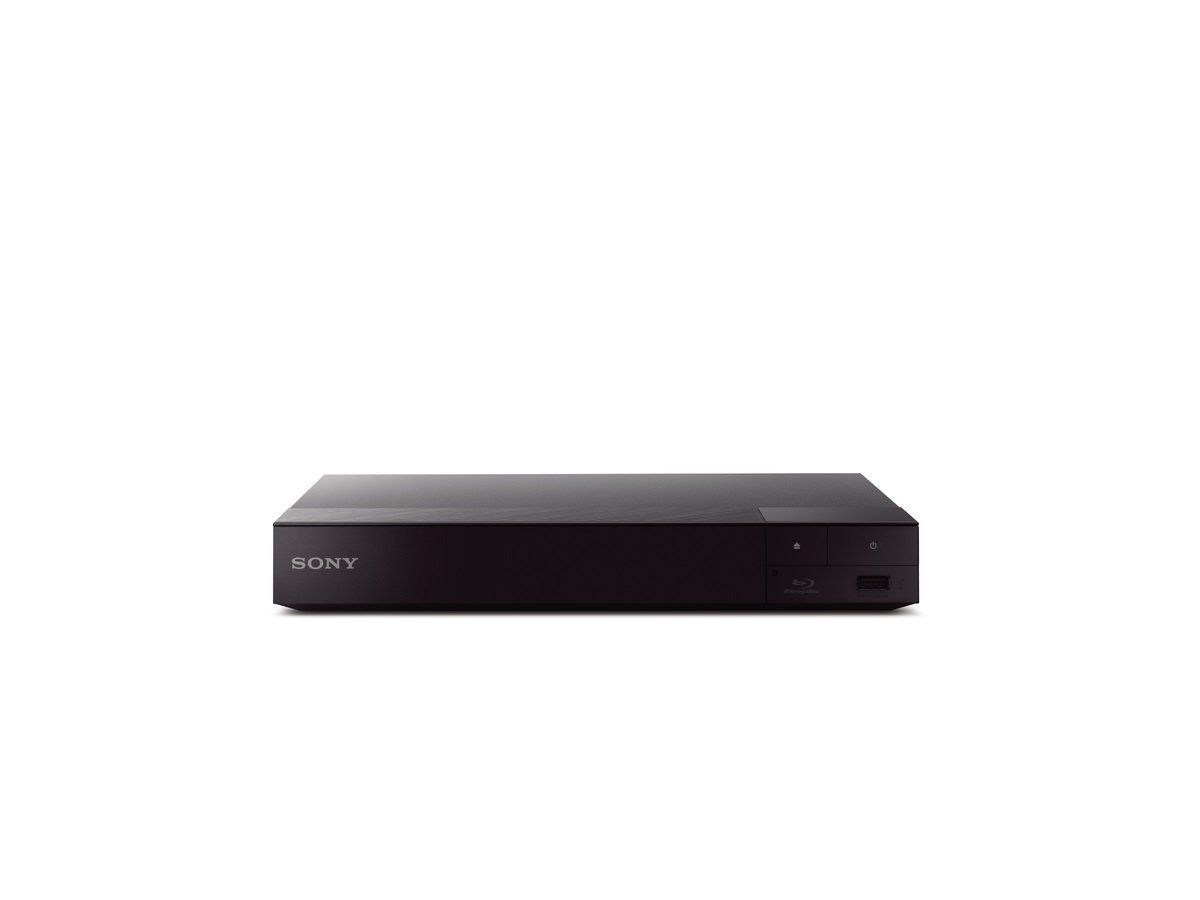 
This Sony Blu-ray player is one of the more feature-rich options available, and it’s also relatively affordable. The BDP-S6700 has a dual-core processor, as well as dual-band Wi-Fi for a speedy wireless connection. Everything loads extremely quickly, with a Quick Start mode and Fast Loading to get Blu-ray discs playing almost instantly (in around 30 seconds from when you close the tray).

For many people, the BDP-S6700 will be the only device they need to access their shows, movies, and music. There’s a USB port for watching pictures and videos you have on a storage device. You can stream content too, with apps like Netflix, YouTube, and Hulu available via a user-friendly interface. Play CDs, play DVDs, watch Blu-rays, and stream shows all on the BDP-S6700. There’s even a screen mirroring feature for watching your phone’s content on a larger screen, and DLNA-certification means you can share content across your home network.

With 4K upscaling, Dolby TrueHD, DTS-HD Master Audio, and TRILUMINOS color technology, the S6700 offers a high-quality picture and exceptional sound. This Blu-ray player is an amazing value for anyone who wants a smart budget Blu-ray player that can do it all. 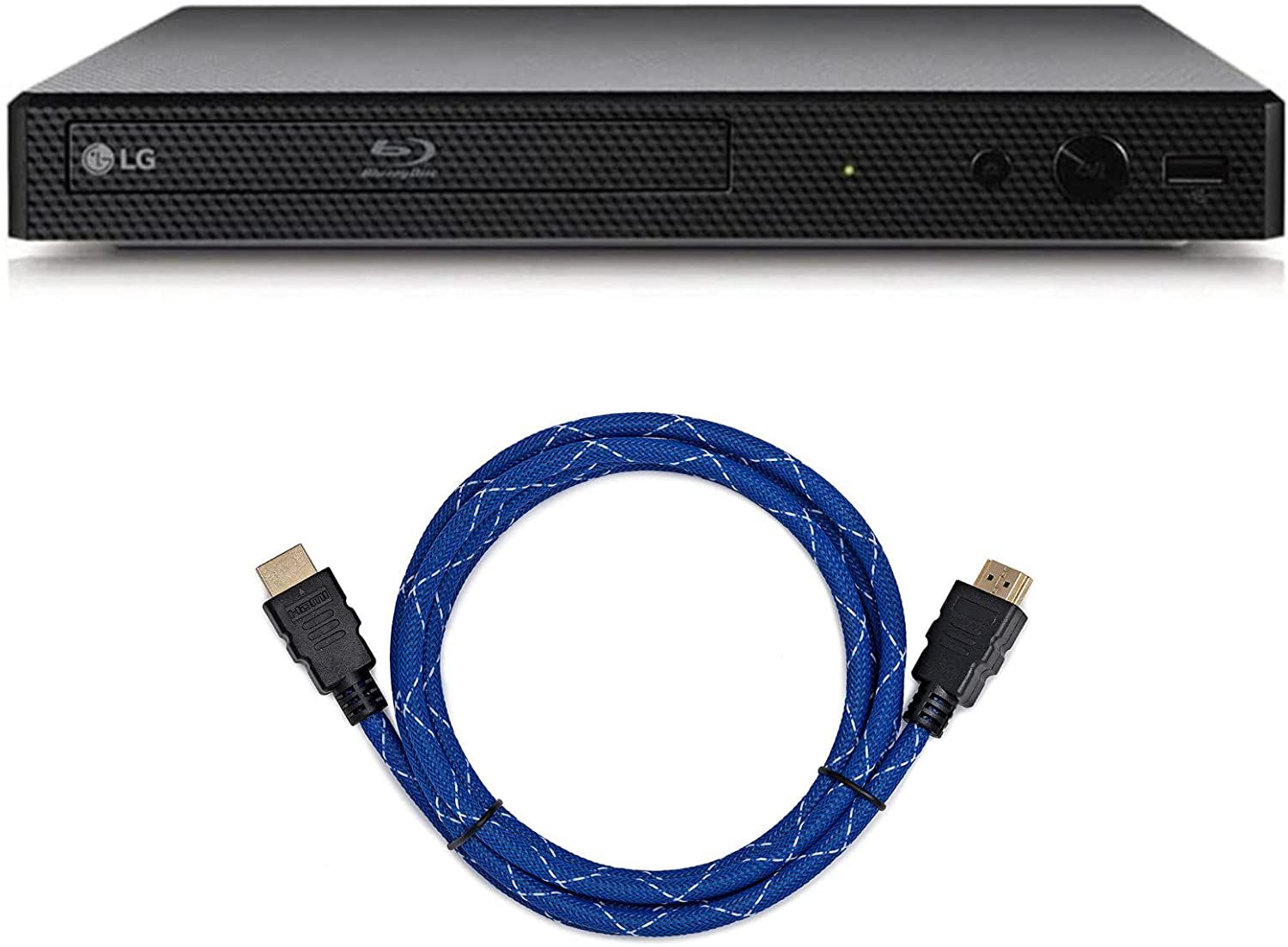 If you’re looking for something a bit more straightforward, this LG Blu-Ray player offers a clear 1080p picture, USB playback, and internet connectivity for streaming content. It doesn’t feature 4K, which is a bit disappointing, but its low price point and other features make up for the lower resolution picture.

This Blu-ray player connects to the internet using a wired Ethernet connection. There’s no Wi-Fi, which is important to keep in mind for those who don’t have an Ethernet cable nearby their entertainment room, but you can access apps like YouTube, Netflix, Hulu, and Amazon Prime when you connect to the web. The BP175 can play CDs and DVDs in addition to Blu-rays, and it supports a number of audio and video technologies like Dolby TrueHD, Dolby Digital Plus, and many more. If you’re looking for a 1080p-capable device that can stream and play discs for less than the cost of a lot of streaming devices, the LG BP175 won’t disappoint.

The 5 Best Upscaling DVD Players of 2022 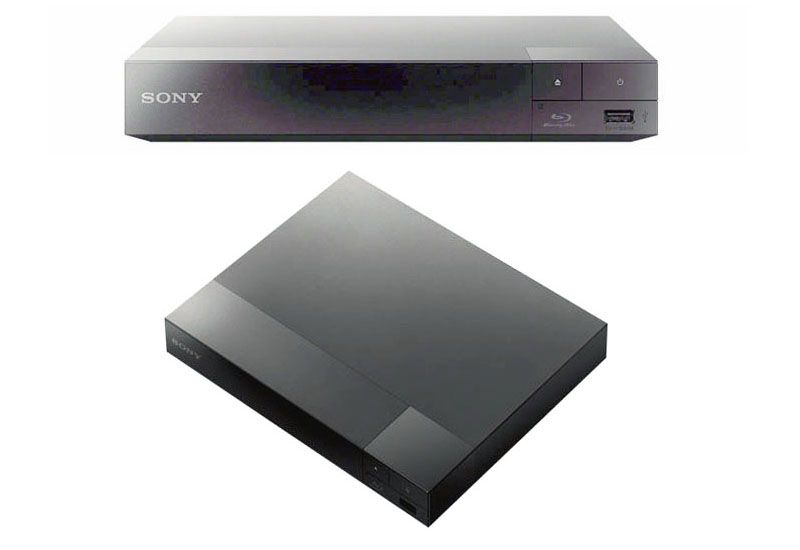 The Sony BDP-S3700 offers a lot of value, featuring Blu-ray, DVD, and CD playback, along with 1080p upscaling for DVD playback when connected to a 1080p TV. Additional capabilities include playback of still images, video, and music stored on USB flash drives or other compatible devices. There’s a front-mounted USB port you can use for content, but you can also plug in an external windows mouse or keyboard.

You get a standard remote control included in the package, but you can use Sony's TV Sideview App to organize content and control the player's transport controls. 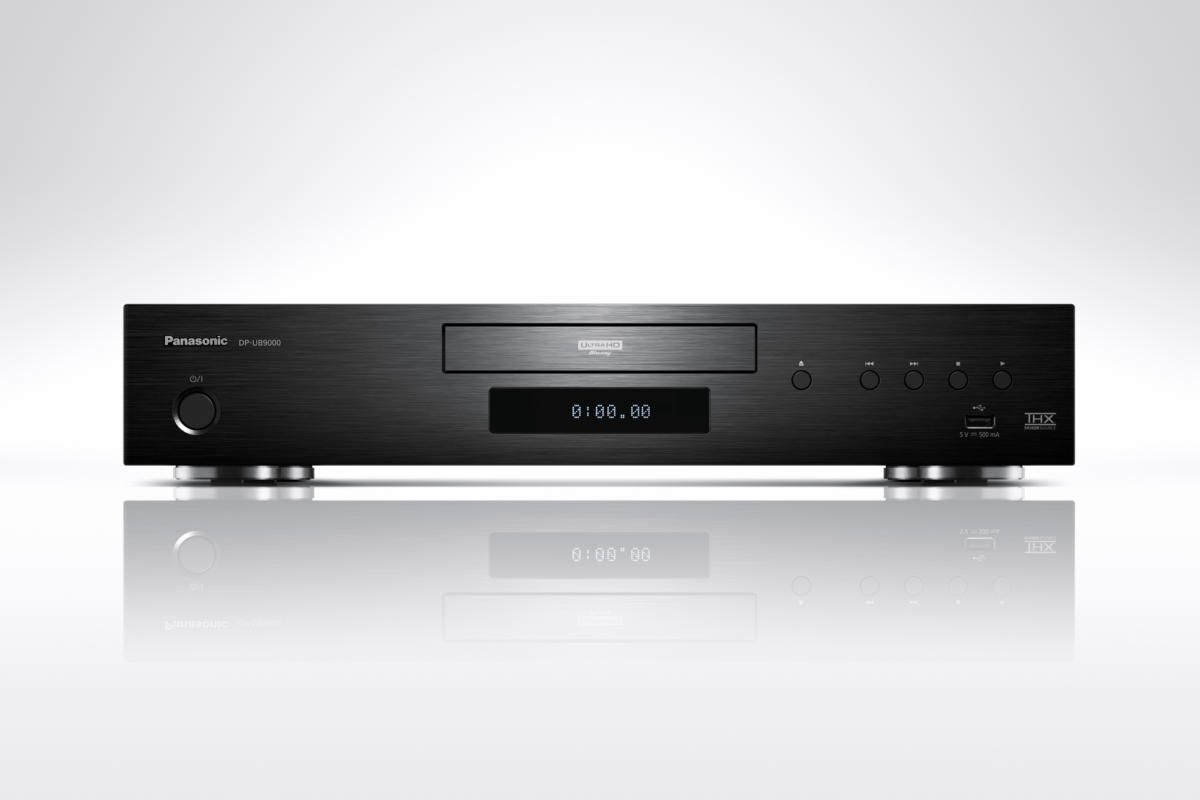 The Panasonic DP-UB9000 might be one of the most expensive options on this list, but that’s because it’s a powerful 4K Ultra HD Blu-ray player with everything you need for a full home theater setup. It's chock full of all the latest and greatest features in its sleek black box. Aside from getting 4K resolution, you also get HDR, hi-res audio, and support for just about every playable format including CD, DVD, Blu-Ray disc, FLAC, Wav, and others. It can even work with 3D HDTVs.

On the audio end, the DP-UB9000 is no slouch, with Dolby Digital Plus, DTS-HD, Dolby Atmos, DTS: X, and others so you can hook it right into your home theater surround sound system. For connectivity, you have everything you need including Wi-Fi, DLNA for wireless PC access, an Ethernet port, Miracast for casting your smartphone, and two HDMI ports. This model is the whole package, and it’s an excellent option for anyone looking for a premium smart Blu-ray player.

The Best DVD Recorders of 2022

The Sony UBP-X1100ES is a solid Blu-ray player that works well with the latest apps and streaming services. It boasts 4K playback and upscaling, as well as Wi-Fi connectivity for streaming services like Netflix, YouTube, Amazon Prime, and others. The UBP-X1100ES supports HDR10 for improved color reproduction and brightness, along with Dolby Vision.

In addition to a richer picture, you get audio enhancements like Dolby Atmos and DTS:X for an improved surround sound experience. It'll work great with existing home theater setup.

There’s an Ethernet port, two HDMI outputs, and an optical port, which should cover all of your bases in terms of connectivity. Bluetooth is a nice bonus, letting you use wireless headphones for private listening.

The UBP-X800M2 has everything you’d expect from a Blu-ray player and much more, including compatibility with 4K UHD discs (including HDR and Dolby Vision), as well as 2D/3D Blu-ray, DVD, audio CDs, and SACDs. You can also play Hi-Res audio files via USB or network-connected PCs.

In addition to physical disc and hi-res audio playback, the UX800M2 is fully capable of streaming 4K content from the internet, via Ethernet or Wi-Fi, including Netflix. So, you can binge your favorite shows or watch a Blu-ray Disc on the same device.

For audio, the UBP-X800M2 is compatible with most surround sound formats, including Dolby Atmos and DTS:X. You can also stream music from the UX800 to compatible wireless speakers via Sony's SongPal App. No speaker system? Listen to your audio via compatible Bluetooth headphones or a portable speaker.

However, as much as the X800M2 offers, only HDMI and Digital Coaxial outputs are provided. Although you can use this player with a non-4K TVs (you just won't get the benefit of its 4K capabilities), your TV must have an HDMI input to accept a video signal. On the other hand, the X800M2 does provide two HDMI outputs, one of which is dedicated to audio-only output. This is very practical for those who own a 4K Ultra HD TV, but a home theater receiver that may not be compatible with 4K/HDR video signals.

The LG UBK80 (view at Best Buy) offers a stunning 4K picture, and it’s an excellent option for those who don’t need Wi-Fi connectivity. The best streaming Blu-ray player is the BDP-S6700 (view at Amazon), as it streams your favorite Netflix and Hulu shows in 4K in addition to playing Blu-rays and other disc formats like DVDs. In terms of sheer value, the Sony BDP-S3700 (view at Amazon) has a lot to offer—it’s slim, fast-loading, it supports 1080p upscaling for DVDs if you have a 1080p TV, and it has internet streaming capabilities.

Ajay Kumar is Tech Editor at Lifewire. With over seven years of experience, he's previously been published on PCMag and Newsweek where he reviewed thousands of products across all categories of consumer electronics. These include audio, TVs, media players, streaming sticks, and other devices.

What to Look for When Buying Blu-ray Players

If you already have a television that’s capable of displaying 4K UHD video, you’ll enjoy exceptional video quality if you choose a Blu-ray player that also supports this level of video quality. If not, a player with upscaling might be something to consider.

One of the great things about Blu-ray players is that a lot of them can also take the place of a dedicated streaming device. Look for a Blu-ray player that supports your favorite streaming apps like Netflix and Hulu.