The must-have accessory if you own this gadget

Rajat Sharma
Writer
Rajat Sharma is a tech writer whose writing has appeared on sites like I Love Free Software andBeebom and he's written for, ZEE Media Enterprises Limited and The Times Group.
lifewire's editorial guidelines

If you’re looking for a simple Apple Watch stand that can also charge the wearable, you don’t even need to bother with third-party solutions. Just get the Magnetic Charging Dock, made by none other than Apple.

Ridiculously straightforward to use, Apple Watch Magnetic Charging Dock lets you charge the watch either in a flat position (with the band undone) or on its side. For docking, all you have to do is lift the magnetic charging module from the center of the stand and prop the watch against it. When docked on its side, Apple Watch automatically goes into the "Nightstand" mode, allowing you to use it as a bedside alarm clock. The dock uses the same inductive charging connector that comes with Apple Watch. It connects via a Lightning to USB cable and uses Apple’s 5W USB power adapter (sold separately). Also, since it’s made by Apple, compatibility isn’t an issue. Apple Watch Magnetic Charging Dock can charge both 38mm and 42mm sizes and is compatible with all Apple Watch models (Series 1 to 4). It’s backed by a one-year limited warranty. 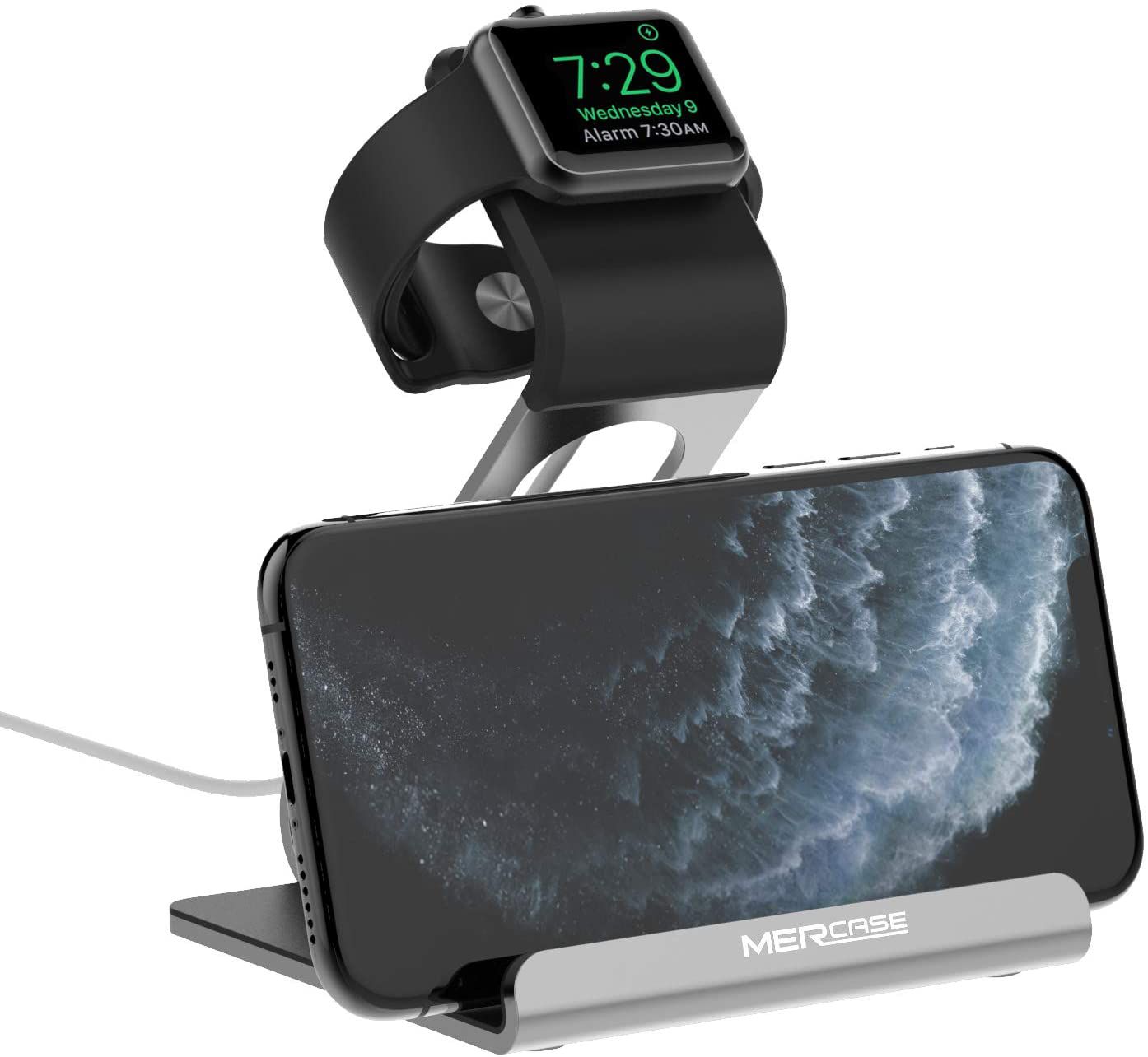 Stylish and versatile, Mercase’s Apple Watch Stand lets you prop up your smartwatch with ease. However, what truly makes this stand amazing is that in addition to the watch, it can also hold your smartphone or tablet.

Mercase Apple Watch Stand features an elevated platform for docking the watch at an optimal angle. It can hold Apple Watch’s charging puck as well, allowing the wearable to be used as an alarm clock in "Nightstand" mode. The platform is attached with the base at the back, with the support panel for the smartphone/tablet propped up (at a 120-degree angle) in the front. It can hold the smartphone even when the latter is in a thick case. The entire stand is constructed from aluminum, with Apple Watch dock having a layer of scratch-free TPU over it. The support panel has a layer of scratch-resistant silicone, while rubber feet at the base of the stand provide enhanced stability and grip. Mercase Apple Watch Stand is compatible with all Apple Watch models (Series 1 to 4), as well as the majority of smartphones and tablets. It’s also backed by a lifetime warranty. 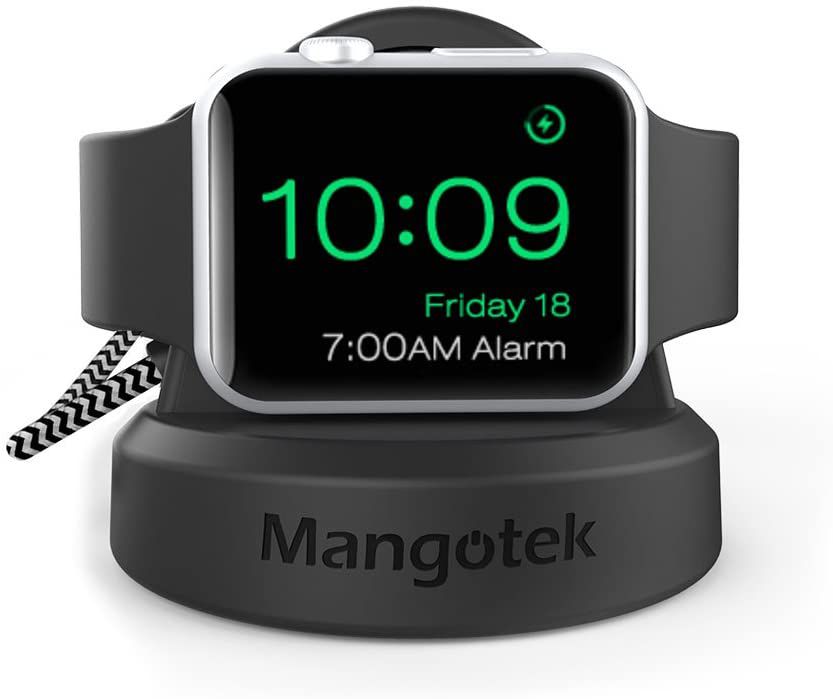 There are numerous Apple Watch stands available out there that let you charge the smartwatch, which is great. But, what if you could use one to juice up your other gadgets, too? Say hello to Mangotek Charging Stand.

Even as a standalone Apple Watch charger, Mangotek’s stand works quite well. It comes with an elevated armrest featuring a built-in magnetic charging module (with support for "Nightstand" mode), which springs into action the moment you place the smartwatch on it. The armrest is affixed to a soft-finish base that’s both sturdy and premium looking. However, the best feature of Mangotek Charging Stand is a dedicated USB Type-A port, located on the side of the base. Having a power output of 2.1A, it can be used to charge everything from smartphones to power banks, using a simple USB cable. The device being charged can be placed on the stand’s base itself, so the whole arrangement stays clutter-free. Mangotek Charging Stand is compatible with most Apple Watch models (up to Series 3), and is powered by 5V/3A adapter. It’s backed by a one-year warranty. 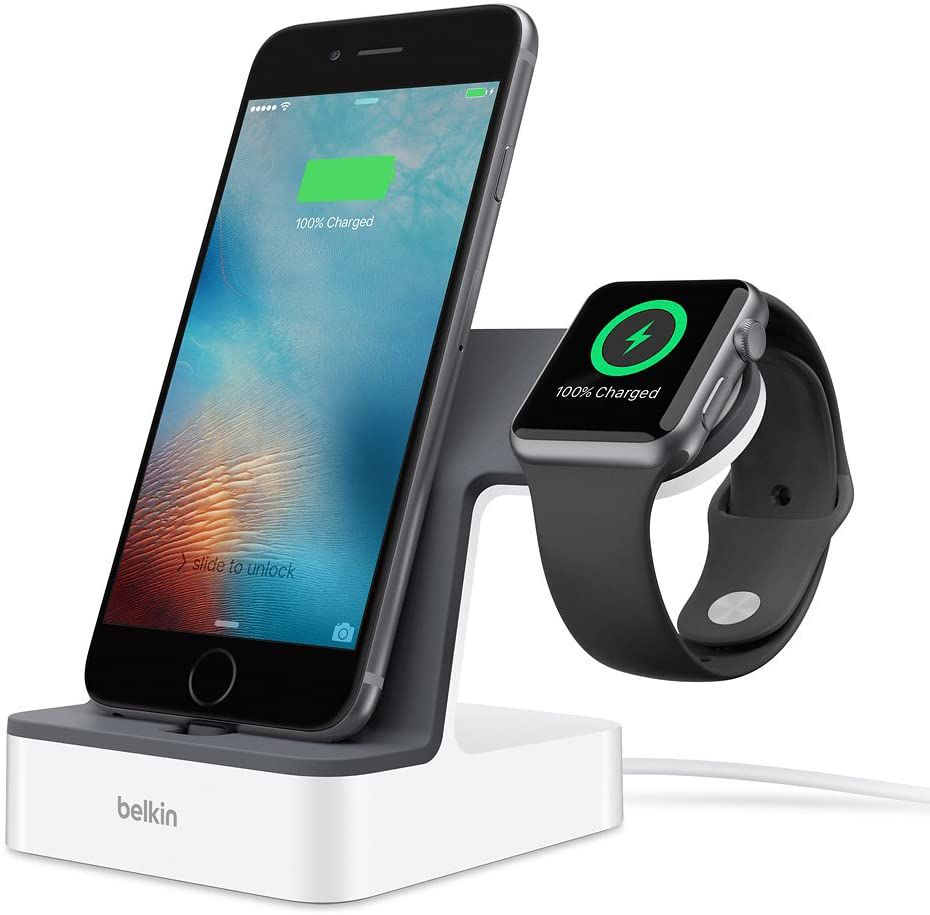 If you have an Apple Watch, it’s all but certain that you use an iPhone as well. Wouldn’t it be great if you could charge both by simply placing them together on a stand? Enter Belkin PowerHouse Dock.

Even though it’s just a penny shy of a Benjamin, the PowerHouse Dock is certainly worth the price. It features a raised docking arm that’s perfectly angled to hold Apple Watch. The arm, which is extended towards the right, comes with a magnetic charging module for the smartwatch. That said, the best feature of Belkin PowerHouse Dock is the Lightning port extending from its base, which lets you charge your iPhone by simply placing it on the stand. Not only that, you can conveniently adjust the height of the Lightning port using the built-in "VersaCase" dial, allowing the iPhone(s) to be charged with most of the protective cases. The stand has a combined output of 3.4A (1A for Apple Watch and 2.4A for iPhone) and comes with a 1.2m long power cable. Belkin PowerHouse Dock is available in two colors – black and white. 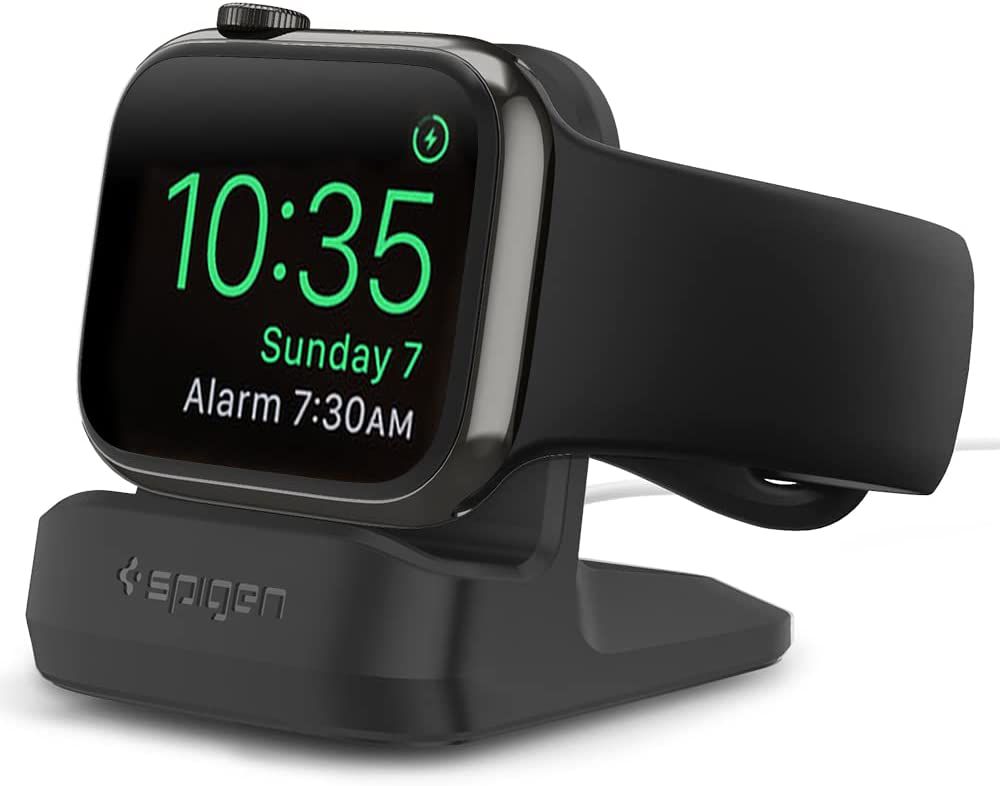 View On Amazon View On Spigen.com

Fancy Apple Watch stands with their laundry list of features are indeed great, but they’re rarely affordable. If you’re on a budget and want something simpler, you may want to take a look at Spigen S350.

Compact and lightweight, the S350 has the same quality that Spigen’s smartphone cases are known for. It features an open dock design, which allows it to be easily used with Apple Watch’s bundled magnetic charging puck. Fully compatible with the wearable’s "Nightstand" mode, it can charge Apple Watch regardless of whether its strap is closed or open. Spigen S350 is made from durable TPU material and comes with a slip-resistant "Nanotac" base. There’s also an adhesive silicone pad, which ensures better compatibility with the 38mm model. The stand works equally well with all Apple Watch models, from Series 1 to Series 4. It’s available in a variety of colors – white, midnight blue, pink sand, black, and volt black. 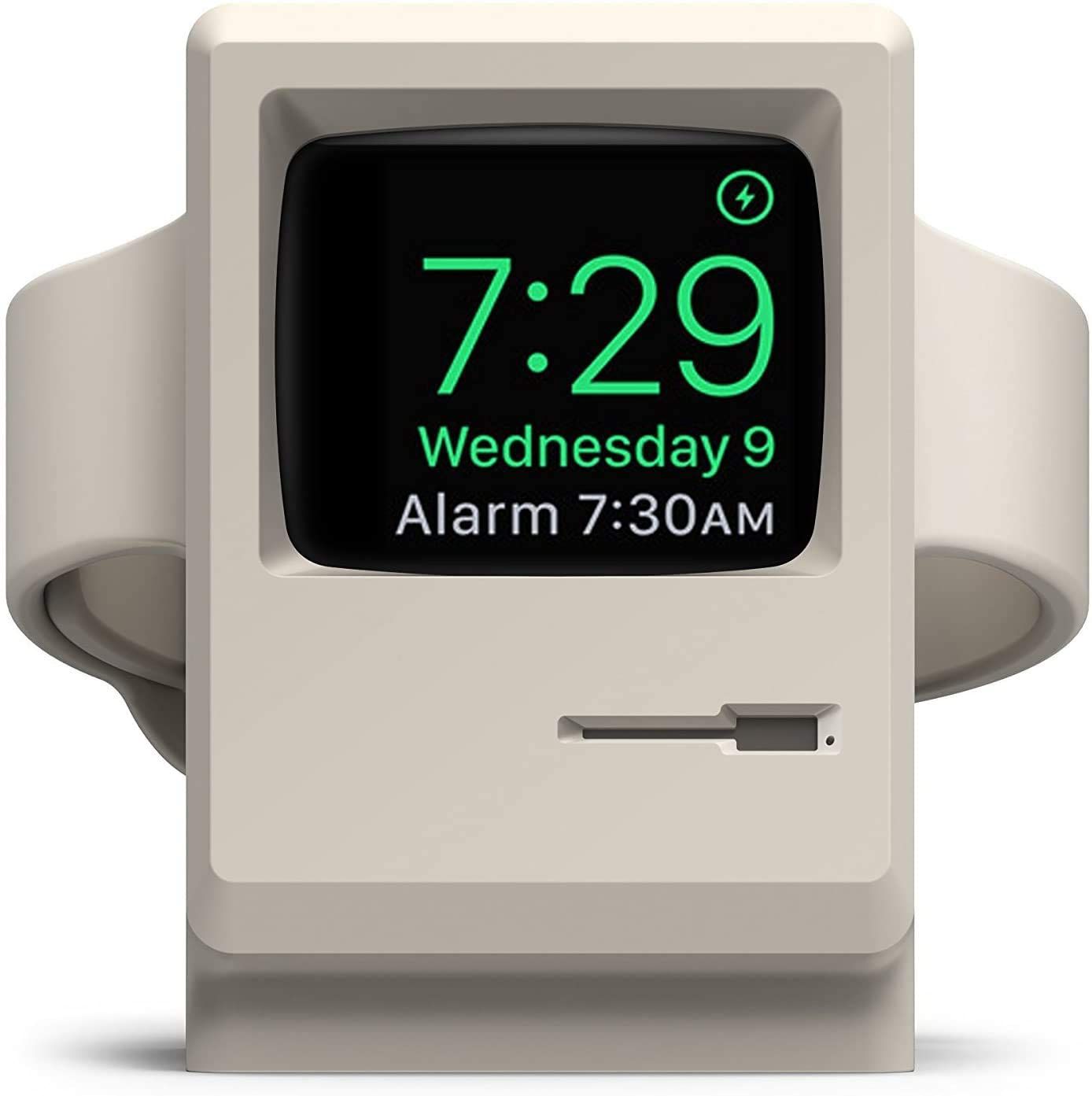 There’s something unique about the designs of yesteryears’ gadgets, which continue to be endearing even today. Love all things old and want to give your modern Apple Watch a retro touch? Get the Elago W3.

Elago W3 isn’t just the best-designed Apple Watch stand out there, it’s also the most adorable. It’s modeled after Apple’s original Macintosh 128K personal computer, which came out in 1984. The stand is made from high-quality silicone that’s both flexible and scratch-resistant. A near-perfect replica of the Macintosh, it even comes with a floppy drive slot. To use the W3, all you have to do is dock your Apple Watch on it. The wearable’s display lines up perfectly with the stand’s front cut-out, giving the impression of an old CRT screen. The stand works great with Apple Watch’s bundled magnetic charging puck and comes with a hole at the back for proper cable management. Compatible with "Nightstand" mode, Elago W3 is available in two colors – classic white and black. 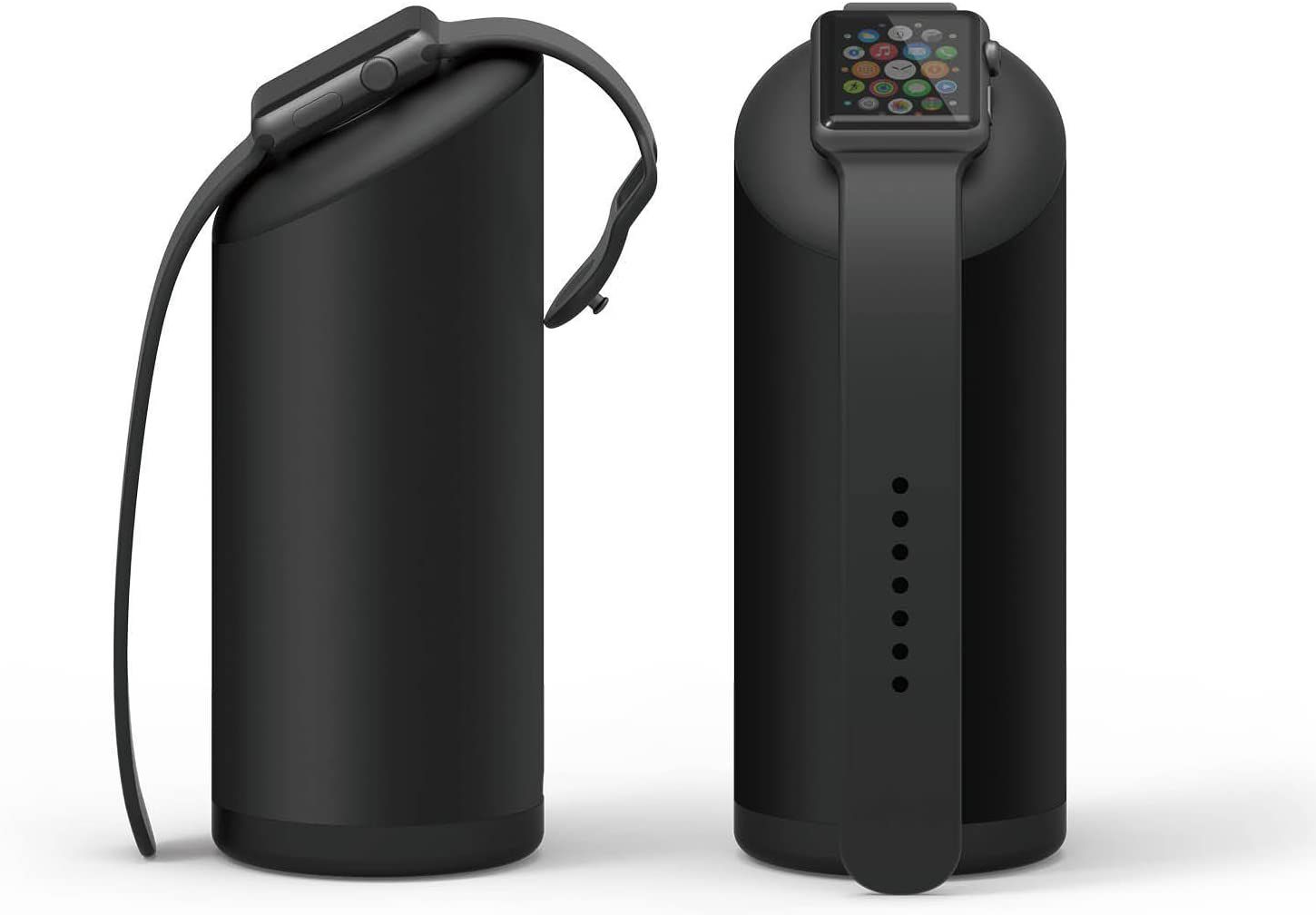 Most watch stands are intended to be used in a fixed location (e.g. bedside), and that’s how it ideally should be. However, there may be times when you need to juice up your Apple Watch while you’re moving (e.g. in a car). For those times, Elago’s W Stand is going to serve you just fine.

Having a premium aluminum construction, Elago W Stand is one of the best accessories you can get for Apple Watch. Its top and bottom panels are made of silicon to prevent any damage to the wearable, as well as the surface that the stand is kept on. The cylindrical design makes for great cable management, allowing even the longest cable to be stowed away sans any issues. But even more importantly, that design lets you keep the stand in your car’s cup holder, making it a cakewalk to charge your Apple Watch on the move. Compatible with all Apple Watch models (Series 1 to 4), Elago W Stand supports "Nightstand" mode. You get five colors to choose from – black, silver, champagne gold, dark gray, and rose gold. 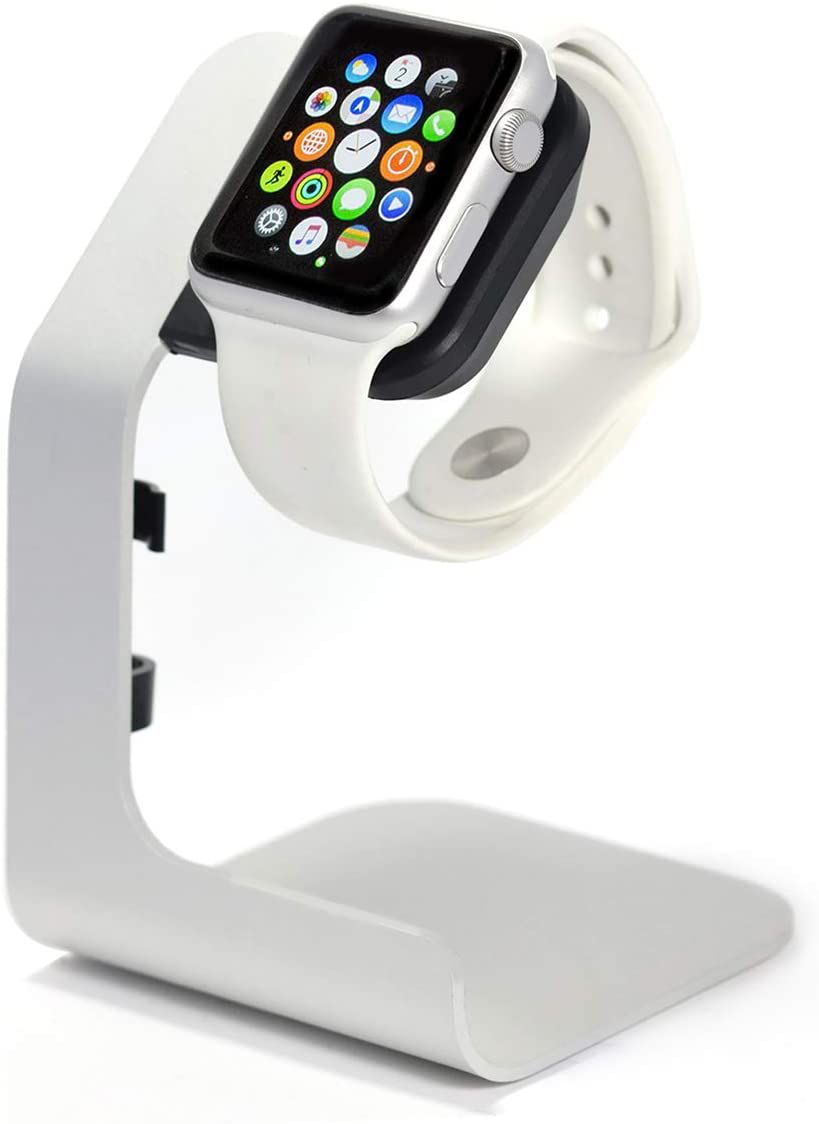 The Tranesca Apple Watch Charging Stand is a sleek and minimalistic metal stand available in silver, gold, rose gold, and black. It serves as a nice bedside companion, letting you see the time and notifications at a glance. It works with every model of the Apple Watch, from Series 1 to Series 5, including 38mm/40mm/42mm/44mm straps. The stand can be angled to 40 degrees, so you can adjust it as you need and it includes cable holder ties to minimize unsightly cable kinking.

Our top pick for Apple Watch charging stands is the Belkin Valet Charge Dock for Apple Watch. It's a premium stand that can handle both your Watch and phone. Plus, it has viewing angles that let it be viewed while charging on your bedside or desktop. As a close second, we also like the official Apple Watch Magnetic Charging Dock. It's simple and straightforward, allowing you to charge the watch either flat or on the side.