The 5 Best Accessories for the Xbox Series X/S

The Rundown
Best Overall:
Microsoft New Xbox Wireless Controller at Amazon
Microsoft has made just the right tweaks, honing the Xbox Wireless Controller into an even better accessory
Best Storage:
Seagate Storage Expansion Card 1TB at Amazon
The 1 TB Seagate Storage Expansion Card was designed specifically for the Xbox X/S.
Best Headset:
Razer Kaira Pro at Amazon
While there are endless options available, the Razer Kaira Pro is our standout for the Xbox Series X/S.
Best Hard Drive:
Seagate Game Drive for Xbox 4TB at Amazon
Seagate is an incredibly trustworthy name when it comes to storage.
Best Budget:
Western Digital Black P10 at Amazon
The 2.5-inch HDD is black with white trim and has a design that looks a bit like a shipping container.

The best accessories for the Xbox Series X/S take advantage of the consoles’ features and improvements, providing a more complete gaming experience. The Xbox Series X is a powerhouse, with insane graphics displayed in up to 8k at 120 frames per second, 12 teraflops of processing power, 1 TB of storage, and 16 gigs of RAM. The more budget-friendly and compact XBox Series S console has some lower specifications, but it’s still a powerful console with fast processing, beautiful graphics, and improved features over previous generations.

When searching for accessories for your Xbox Series X or Series S console, speed is the name of the game. You want controllers, headsets, and storage devices that have ergonomics and integrations to enhance your console’s features, instead of those that slow you down in the middle of gameplay. After evaluating dozens of devices, our pick for the best accessory for the Xbox Series X/S is the latest model of the Xbox Wireless Controller. Among other upgrades, the controller’s new share button and hybrid D-pad are welcome additions. If you’re not in the market for a controller, we’ve also included picks in other categories, like the best budget Xbox Series X/S accessory, the best headset, and the best storage device.

When you already make one of the best controllers in the game, why completely change what’s working? Microsoft has made just the right tweaks, honing the Xbox Wireless Controller into an even better accessory, with seamless pairing and switching between multiple Xbox consoles, PC and Android support, and even IOS support coming in the future.

The manufacturer aims to make the Xbox Wireless your only controller. It added texture in all the right places, including on the triggers and back part of the controller to promote better handling. This texture keeps the controller firmly rooted in your hand for those intense sessions, and ensures your hands don't slip during a crucial shot. A new and improved hybrid D-pad gives a better feel for your thumb and easier motions, and customized button mapping helps make the accessory feel like it’s designed for you.

Keep in mind this controller requires AA batteries, which could be seen as a pro or a con, depending on what you prefer. There’s also a new share button, which will allow for easy screenshots or capturing mid-game. With Carbon Black, Robot White, or Shock Blue color options and a 3.5 mm jack for your headset, the Xbox Wireless Controller is a stylish, functional, and reliable option that can meet your next-gen needs.

One of the best features of the Xbox Series X/S is the new storage expansion slot built right into the back of the console for easy SSD expansion. The 1 TB Seagate Storage Expansion Card was designed specifically for the Xbox X/S, and it goes in that slot.

Designed to replicate the Xbox Velocity Architecture, it delivers virtually no lag when compared to the internal drive. You can utilize your Xbox’s quick resume function, flipping between ready-to-play games instantly whether they’re on the internal drive or on the expansion drive. Connecting the NVMe expansion drive is as easy as plugging it in, and it boasts a Max data transfer rate of 2,400 MB/s.

The price is higher than you’d typically pay for the same amount of storage, but you’re paying a premium for convenience and what is essentially an extension of your already-fast internal drive. The Seagate Expansion Card offers a great way to expand your storage without adding extra wires or devices to clutter up your play area. With the included three-year warranty, you get peace of mind knowing you’re buying a quality storage solution.

A good headset for gaming is a must-have, immersing you in the world and giving you the best sound and chat capabilities. While there are endless options available, the Razer Kaira Pro is our standout for the Xbox Series X/S. This headset includes smart design choices and creature comforts that some other headsets seem to leave out.

The black and green design fits well with other Xbox accessories, and the dual-ear headband design provides a comfortable feel. The cups have FlowKnit memory foam ear cushions, which reduce head squeezing, while also promoting breathability. There’s nothing worse than a headset that gives you sweaty ears and that tight-headphone headache.

Plentiful buttons on the ear cups allow for quick control, especially the well thought out game/chat balance wheel, which lets you tune the game volume and chat volume quickly. There are also volume wheels, pairing buttons, and mute buttons. The wheels allow you to make quick adjustments without pressing buttons on a headset, which tends to take longer. Sound quality and chat quality are excellent on this headset too, as the ear cups include 50mm titanium drivers. The detachable 9.9mm directional mic helps reduce background sounds, and you end up with accurate sound and voice quality. Well made and thoughtfully designed, the Razer Kaira Pro was an easy pick for the best headset for the Xbox Series X/S.

Seagate is an incredibly trustworthy name when it comes to storage, so it’s no surprise we selected the 4TB Seagate External Hard Drive Game Pass Edition. It not only includes the drive but also a two-month trial to Xbox Game Pass, which gives you access to a bunch of games. With all of those games, you're going to need the extra storage.

The drive has USB 3.0 technology, with a max speed of 140 MB/s. Not as fast as an SSD might be, but you could certainly game directly from it, and you’ll be able to quickly transfer from the external to internal drives. The Game Pass edition is white and has a sleek low profile design that does its best to blend in with the Series S Console. It has a relatively easy plug-and-play setup, which means you can start using the drive quickly and easily.

The Seagate External Hard Drive also comes in a 2 TB version, which includes only one month of Gamepass instead of two. 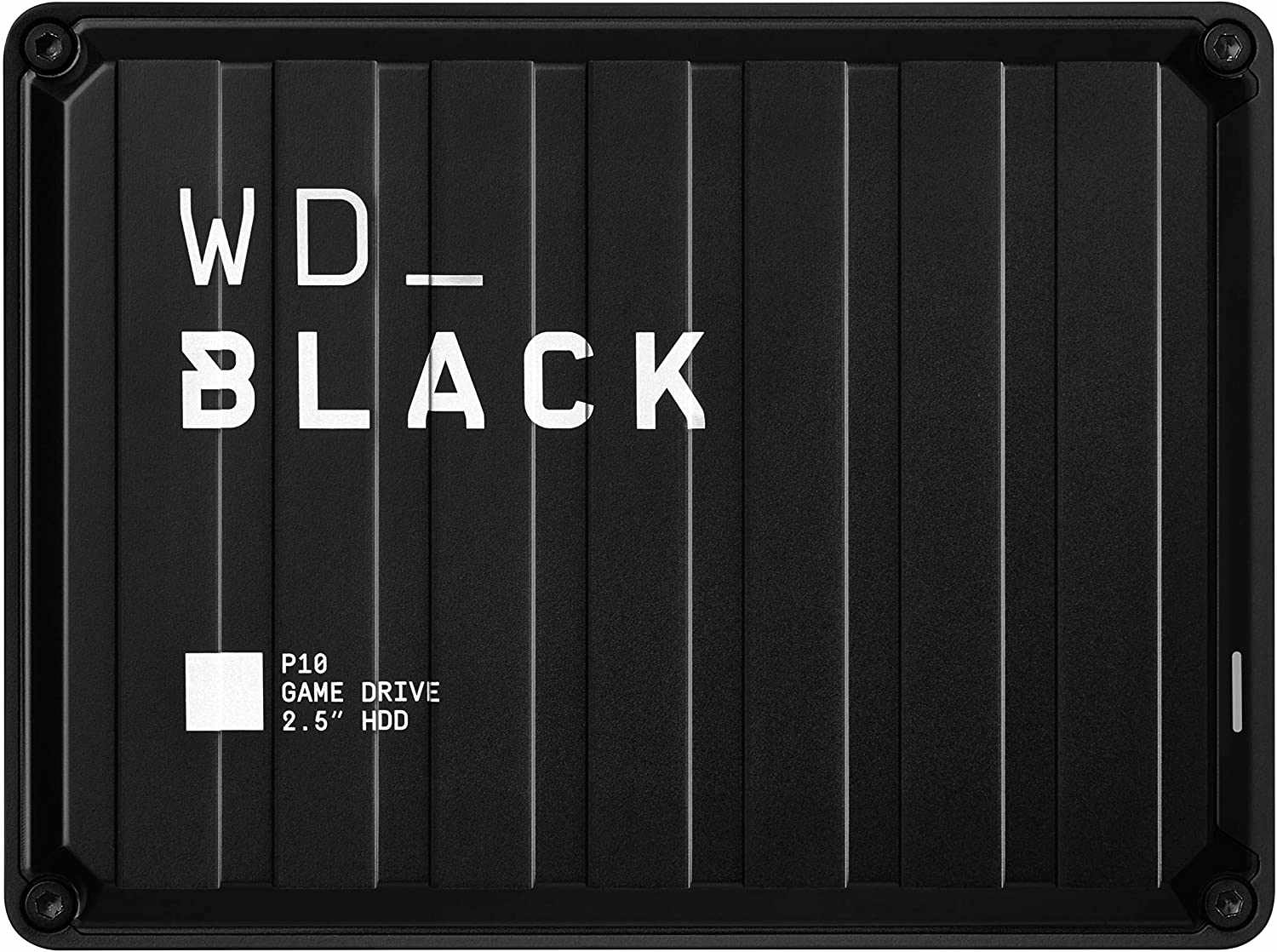 The 3 TB WD Black External Hard Drive for Xbox looks like it was built for a purpose, that purpose being to match your new Xbox X/S console without breaking your bank. Available at under $100 dollars, this XBox specific drive offers some really great features. The 2.5-inch HDD is black with white trim and has a design that looks a bit like a shipping container.

With max speeds of around 130 MB/s, you will get reasonably fast transfers when moving your games to your internal drive for play. While not as fast as an SSD, you are getting a large amount of storage for a rather small price. Plus, at only 4.65 by 3.46 by 0.5 inches, you’ll easily be able to bring your game library with you on the go and be secure in the fact that it’s well protected.

Western Digital offers a three-year limited warranty to help protect your investment, and they are also including two months of Xbox Game Pass along with your purchase, which will give you instant access to many great games, and luckily, you’ll have just the place to store them.

The Xbox Wireless Controller improves upon an already intelligent design, making it the best accessories for Xbox Series X/S consoles. Plus, it’s an excellent option for anyone who plays on both Xbox and PC. The Seagate Storage Expansion Card is the best storage solution, as it plugs right into the back of the console and offers lightning-fast transfer rates.

What to Look for in an Xbox Series X/S Accessory

Gaming Performance- How will the accessory affect your gaming? For tactile accessories that you have to operate during gameplay, the buttons should be quick and easy to access. You shouldn’t have to remove your hands from position for an extended period of time. The accessory should take into account your need to have lightning-fast response times, and design the accessory accordingly.

Compatibility- Do you have to go through extra steps to get the accessory to connect to your console? It’s best to go for plug-and-play accessories that don’t require any additional hassle. Some people also like accessories they can use across multiple devices or generations of Xbox consoles. Look at which devices the accessory will work with, and make sure it fits your needs.

Durability- Gaming accessories tend to take a lot of abuse, so durability is essential. Controllers and headsets must be able to withstand countless sessions, and portable hard drives need to be able to go in a backpack when you want to take your library with you. Check out the components, materials, and the warranty, as these can all help indicate whether or not an accessory will hold up or not.