These small models were made for work and play

by
David Dean
Writer
David Dean is a writer who specializes in consumer and travel tech. He has been published in The New York Times, Chicago Tribune, and other publications.
our editorial process
David Dean
Tablets

The Rundown
Best Overall:
Huawei MediaPad M5 at Amazon
"There's a snappy octa-core Kirin 960 processor, 4GB of RAM, and 64GB of storage space with a micro-SD slot should you want to expand that further."
Best for No-Frills Value:
Lenovo Tab 4 at Amazon
"The plastic body holds a quad-core 1.4Ghz processor, 2GB of RAM, and 16GB of storage."
Runner-Up, Best Overall:
Lenovo Tab 4 Plus at Amazon
"A "Plus" variant of the Lenovo Tab 4, this 8-inch tablet expands on the standard model's hardware specifications with an upgraded 64-bit Octa-Core Snapdragon processor."
Best Budget:
Amazon Fire HD 8 Tablet at Amazon
"Typically costing well under $100, the Fire HD 8 is available in a variety of colors and lasts up to ten hours on a single charge."
Best Under $200:
Samsung Galaxy Tab A 8" at Amazon
"You'll get a quad-core 1.4Ghz processor, 2GB of RAM, and 16GB of storage, along with a micro-SD slot for boosting said storage."
Best for Apple Fans:
Apple iPad Mini 4 at Amazon
"Gain access to the App Store and iOS-only services like iMessage."
Most Durable:
Samsung Galaxy Tab Active2 at Amazon
"Essentially a rugged version of Samsung's standard tablet range (it's intended mainly for commercial use), this model is built to take a beating."
Best for Seniors:
Consumer Cellular Grandpad at Best Buy
"The heavily-customized interface only has a few options, shown by large, simple icons for things like calls, photos, camera, games, and so on."

If you're looking for the best mix of performance, design, and price, it's hard to look past Huawei's MediaPad M5. Available in both 8.4- and 10.8-inch versions, the smaller sibling packs a lot inside. There's a snappy octa-core Kirin 960 processor, 4GB of RAM, and 64GB of storage space with a micro-SD slot should you want to expand that further.

The bright and colorful 2560 x 1600 display is pin-sharp, and when paired with the stereo Harmon Kardon speakers, it makes watching your favorite shows very enjoyable. While you're unlikely to be taking a lot of photos with any tablet, the 13MP rear camera does a decent job; there's also an 8MP camera on the front for selfies and video calling.

The 5100mAh battery can last up to 11 hours of binge-watching and takes as little as two hours to go from flat to full. The only real downside is the lack of a headphone jack. You're going to need to use the included adapter or opt for Bluetooth headphones. With an attractive design and weight of just 0.7 pounds, the MediaPad M5 is about as good as it gets in the world of 8-inch tablets.

Here's the thing — other than a longer-than-usual battery life, the Lenovo Tab 4 really doesn't offer anything that's worth writing home about. Basically, the tablet is a well-made 8-inch model that's competitively priced and does the basics well. But sometimes, when you don't have much to spend, that'll do.

The plastic body holds a quad-core 1.4Ghz processor, 2GB of RAM, and 16GB of storage. Those specifications aren't top of the line, but as long as you're not pushing it too hard, the Tab 4 will handle most tasks. There's a micro-SD slot for adding extra storage, a 2MP front camera, and a 5MP rear-mounted version. The HD display is impressively vibrant and bright for an inexpensive tablet, and the twin Dolby speaker setup pushes out plenty of sound.

Lenovo also sells add-on packs to expand the usefulness of the Tab 4, including a "Kids Pack" with a rubber bumper and content management tools, a "Home Assistant" pack that adds Alexa support and dedicated speakers, and a "Productivity" pack that includes a keyboard case.

A "Plus" variant of the Lenovo Tab 4, this 8-inch tablet expands on the standard model's hardware specifications with an upgraded 64-bit Octa-Core Snapdragon processor as well as 2GB of RAM, 16GB of memory, and a Full HD display. The cameras are also much improved, with a 5MP sensor on the front and 8MP on the back, and the aging micro-USB port has been replaced with a more modern USB-C version. Dual-glass casings protect your tablet from scratches and bumps, and if your kids will be playing with it, you can also opt for a shock-resistant bumper and blue-light screen filter. With a single charge providing 20 hours of battery life, you'll have plenty of time to curate your Spotify playlists, stream Netflix, and shoot off emails.

The biggest upgrade between the standard Tab 4 and the Plus, however, is the addition of LTE support. Drop in a SIM card from AT&T, Verizon, or T-Mobile, and you've got Internet access anywhere you've got service. Because this is an unlocked device, you can also use it with SIM cards from other companies when traveling overseas. 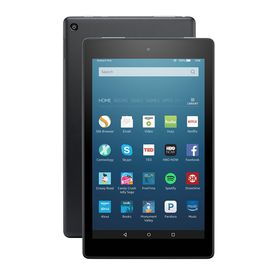 3
Buy on Amazon Buy on Best Buy Buy on staples.com

Don't have much to spend, but still want a small tablet that's good for web browsing and streaming your favorite shows? Amazon's Fire HD 8 is your best option. The Fire HD 8 is available in a variety of colors and lasts up to ten hours on a single charge. It ships with either 16 or 32GB of storage, and there's a micro-SD slot for adding more if you need it.

The screen's 1280 x 800 resolution isn't particularly impressive, but it's nice and bright, rendering it fine for watching HD video. Likewise, the quad-core 1.3Ghz processor and 1.5GB of RAM are enough for most general-purpose tasks.

The Fire HD 8 comes with hands-free Alexa support, so you can use your voice to ask questions, get news and weather updates, play music, and control your smart home devices. A full-screen "Show Mode" makes it easier to see what's going on — even from across the room. A 2MP front camera lets you make video calls, and there's a standard headphone jack so you can plug in headphones. 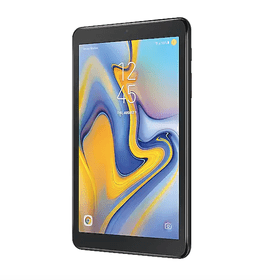 While most of Samsung's attention is focused on its mobile offerings — the high-end Galaxy S range, specifically — the company makes plenty of lower-cost devices as well. A great example in the tablet space is the affordable Galaxy Tab A.

For your money, you'll get a quad-core 1.4Ghz processor, 2GB of RAM, and 16GB of storage, along with a micro-SD slot for boosting said storage. There's also a bright and colorful HD display with good wide viewing angles, and a headphone jack and physical home button. Those specifications are standard for a low to mid-range tablet, but the Tab A stands out in a couple of different ways. Firstly, you'll find better cameras than usual, with a 5MP version on the front, and an 8MP version on the back that lets you take passable photos in a pinch.

Secondly, the 5000mAh battery is larger than those you'll typically find elsewhere, and as a result, you'll get up to fifteen hours of use out of the Tab A before needing to find the USB-C charger. Those extras, plus the peace of mind that comes with buying your device from a major manufacturer like Samsung, pushes the Tab A to the top of our list.

Like many major tablet manufacturers, Apple has turned its attention to large-screen models in recent years. The iPad Mini 4 is still available, however, and while it doesn't offer the same value as Android-based equivalents, it's not a bad option for those wanting a smaller device or one in the iOS ecosystem.

The Mini 4 was released towards the end of 2015, which explains the aging A8 chipset and 2GB of RAM. The Mini 4 still performs well in general use despite that, however, and comes with the latest iOS version installed. While several different storage capacities were available at launch, only the 128GB model is still sold new. On the upside, this makes the lack of a micro-SD slot irrelevant for most people, since they're very unlikely to run out of space.

The biggest reason to buy an iPad Mini 4 is gaining access to the App Store and iOS-only services like iMessage, offering you easy integration with other Apple devices you might own. If you've got an iPhone and just want a small tablet that you already know how to use, the Mini 4 is the way to go.

Most tablets are designed with size and aesthetics in mind rather than durability, but that's definitely not the case with Samsung's Galaxy Tab Active2. Essentially a rugged version of Samsung's standard tablet range (it's intended mainly for commercial use), it's built to take a beating. An IP68 rating means it's highly dust and water-resistant, able to handle being submerged in up to five feet of water for half an hour.

The tablet comes in a heavy-duty rubber enclosure to protect it from drops and knocks; the case also provides a place to store the chunky "S Pen" stylus. While you can also use the touchscreen, stylus support means you don't need dry or clean hands to interact with the screen. There's even a special mode to let you use it while wearing heavy work gloves.

The life of the (replaceable) battery is good, at up to 11 hours, but performance is only average for the money. Still, you're unlikely to buy a tablet like this to play the latest 3D games on, and it's great for general tasks and productivity apps. 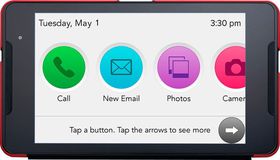 If you've got a parent or grandparent who'd like to stay in touch and see what the family is up to, but who doesn't want to deal with the complexities of a popular tablet or laptop, the Grandpad might be just what's required. Rather than focusing on fancy features and extras, the Grandpad simplifies things to the bare minimum. The heavily-customized interface only has a few options, shown by large, simple icons for things like calls, photos, camera, games, and so on. There's no web browsing, or ability to add other apps. Unlimited LTE access is built in so there's an ongoing monthly charge for this, but that also covers 24/7 access to an agent who can answer any questions or troubleshoot problems. Accessories like a case and wireless charging dock are also included.

A relative acts as the conduit for things like photos and contacts, controlling what gets pushed to the Grandpad. It's a specialized device, but in an age where lack of technological access or confidence can be isolating, it's a necessary one as well.