High-resolution video for all kinds of budgets 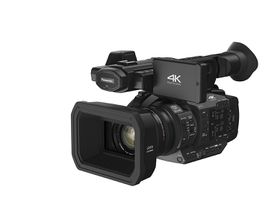 If you’re looking to do some serious videography, then you should definitely consider Panasonic’s professional HC-X1 camcorder. It’s got a 24mm (in 35mm equivalency) Leica Dicomar lens on the front with up to 20x optical zoom, giving you a massive range of flexibility in your recording. On top of that, you’ve got manual control of the focus and aperture along with an adjustable neutral density filter built in.

The Panasonic HC-X1 captures some impressive Cinema 4K footage at 100Mbps. You can also drop the resolution slightly to 4K UHD but increase the frame rate to 60fps and the bitrate to 150Mbps. The HC-X1 can keep your video steady as well with its five-axis stabilization.

Many of the controls are built right onto the side of the camera for easy access. It also has a small display in addition to the viewfinder, so you can film however you prefer. It may be pricey, but the performance and flexibility this camera offers are top-notch. 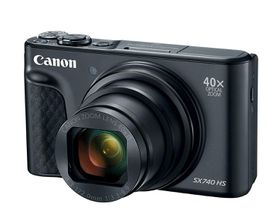 3.2
Buy on Amazon Buy on Walmart Buy on canon.com

Canon has a capable little point-and-shoot camera that surprises with some 4K capabilities up its sleeve. It packs a 20.3MP CMOS sensor for sharp photography and a zoom lens offering an impressive 40x optical zoom. The Canon PowerShot SX740 HS keeps things compact with a three-inch LCD display on the back and no viewfinder. (There's still is a pop-up flash, though.)

The Canon PowerShot SX740 HS can shoot 4K UHD video at up to 30fps, and that video capability is paired with a 120Mbps bitrate. It might not boast Cinema 4K, higher frame rates, or HDR, but the PowerShot SX740 HS is also significantly cheaper than most other cameras on the list while still offering incredible zoom and optical image stabilization.

If you don't need a bunch of extra features and would rather have a simple little device that’ll capture 4K footage wherever you go, then you can’t go wrong with the GoPro Hero7 Black. It’s a small, highly-portable action camera designed to go where you go and capture most of what you see thanks to a wide field of view.

The GoPro Hero7 Black offers 4K video recording at up to 60fps and a bitrate of 78Mbps. It also has GoPro's Hyper Smooth video stabilization, which can make your videos a lot less shaky even when you’re recording intense activities. The camera is also capable of capturing 12MP still photos.

Another key aspect of the GoPro Hero7 Black’s appeal is its rugged design. This camera is meant to go on adventures so it's built tough, with water resistance letting you take it up to 33 feet underwater. If you want a camera that’ll capture 4K video for you just about anywhere, then this is the one.

For 4K video at a more affordable price, Panasonic's HC-VX981K is a powerful and compact camcorder. This camcorder has a 1/2.3-inch sensor with 18.9 megapixels, and that sensor is settled behind a Leica Dicomar lens that offers 20x optical zoom and a wide f/1.8 aperture. Far-off subjects will seem a lot closer with this lens.

The Panasonic HC-VX981K can record 4K UHD video at 30 frames per second and a bitrate of 72Mbps. If 4K isn’t your only concern, you also have the option of shooting in an HDR mode at lower resolutions, which lets you trade resolution for light and color quality. And, to make all your footage look that much better, five-axis image stabilization will reduce the shake from handheld recording.

The Panasonic HC-VX981K has some fun tricks up its sleeve as well. One mode can help you keep your footage level automatically, while another tool lets you use your smartphone camera as a wireless secondary camera to record multi-angle, picture-in-picture footage. For a simple but effective 4K video option with nice flexibility, this is a winner.

Buy on Amazon Buy on panasonic.com

When you think of a video camera, you might think of camcorder style devices first, but digital cameras are shaking things up with capabilities that are just as powerful. The Panasonic Lumix GH5 offers such a potent blend of performance and features that it’s easily one of the most compelling choices for 4K video on the market.

The Lumix GH5 falls short of the Lumix GH5S in a couple of ways, but it more than makes up for it with its smaller price tag and some critical extra features like image stabilization. The GH5 is capable of recording both Cinema 4K and 4K UHD resolutions, with the latter shot at up to 60fps. It also has a high bitrate of 150Mbps. Hybrid Log Gamma can also let you shoot video that’s ready for HDR displays, with more color and light detail than standard video.

After all that, you still get to factor in multiple types of image stabilization, the flexibility of interchangeable lenses, powerful auto-focus, a 20.3MP sensor that’s also well-suited for photography, and a design that’s built to resist the elements. Unless you have your heart set on a camcorder or something really small, this is the DSLR to get for great 4K video.

It’s practically a toss-up between the Fujifilm X-T3 and the Panasonic Lumix GH5, but we gave favor to the GH5 for its built-in image stabilization and bigger handgrip. That said, the Fujifilm X-T3 is every bit as ready to shoot stunning 4K video as the Lumix, and it comes at an even more affordable price.

The Fujifilm X-T3 features a 26.1MP APS-C size sensor, and you’ll have your pick of Fujifilm lenses to mount in front (including some options with image stabilization). This camera is capable of processing both Cinema 4K and UHD, with the latter recorded at up to 60fps. It can also record at a high bitrate of 400Mbps. And if you’re looking for serious flexibility, you can output uncompressed video via HDMI to an external recorder.

Hybrid Log Gamma recording will also set you up for HDR video. Like the Lumix, the Fujifilm X-T3 is also built with durability in mind — its weather-resistant design provides an extra layer of protection if you're shooting in less-than-favorable conditions.

While 4K video may look best on a big TV, the device capturing that 4K footage doesn’t have to be big. Case in point: the Sony Cyber-Shot RX100 VI. Sony’s line of Cyber-Shot RX100 cameras have been impressive beyond their size, and with the Mark VI model, the video specs got a bump. At this point, it's a very capable little camera.

The Cyber-shot RX100 VI boasts a one-inch sensor with 20.1MP and a 24-200mm Zeiss zoom lens. It also has a dazzlingly fast hybrid autofocus system that combines contrast and phase detection. It may lack Cinema 4K, but it records 4K UHD at 30fps and 100Mbps, with that 4K footage downsampled from a higher 5.5K for improved visuals. It also supports Hybrid Log Gamma.

Despite its incredibly compact design, it still features a pop-up flash, an LCD display, optical image stabilization, and even a pop-up OLED electronic viewfinder. Given all that, the Cyber-shot RX100 VI is a pretty great value for the money.

You can save a bit of money if you’re willing to go with a lesser-known brand, although Yi has been making a name for itself lately. The Yi 4K+ action cam offers 4K video recording at 60fps and 135Mbps using a Sony IMX377 image sensor. It can also capture still photos at 12MP. Given how much cheaper the Yi 4K+ is than GoPro’s Hero7 Black, it’s impressive that it can offer 4K at such a high frame rate.

The 4K+ also offers electronic image stabilization for your video, though EIS is limited to 4K at 30fps. With a 1200mAh battery, the Yi 4K+ can record its top-quality video for up to 70 minutes. And recharging is just that little bit easier thanks to a reversible USB-C charging port.

The Yi 4K+ doesn’t offer the rugged design of its GoPro rival, but waterproof cases are available at affordable prices that, even purchased together, make this camera a lot less expensive than the GoPro. For pretty much the most affordable option offering 4K at 60fps, check out the Yi 4K+.