Check out top large tablets from Apple, Microsoft, and more

Jennifer Allen
Writer
Jennifer Allen has been writing about technology since 2010. Her work has appeared in Mashable, TechRadar, and many more publications.
our editorial process
Jennifer Allen
Tablets

The Rundown
Best Overall:
Apple iPad Pro at Apple
"The iPad Pro is a powerful tablet that has the perfect combination of smartphone and laptop features."
Best Budget:
Pro 12 12.2-inch at Amazon
"Great tablets don't have to cost a fortune to still be useful."
Best Windows Experience:
Microsoft Surface Pro 6 at Amazon
"Lightweight and ideal for both work and pleasure."
Best for Entertainment:
Samsung Galaxy Book at Amazon
"Able to play games and watch videos for a number of hours."
Best 2-in-1:
Huawei MateBook 12-inch at Amazon
"Smart yet competent, this is an easy 2-in-1 to toss into your bag."
Best Premium Option:
Microsoft Surface Pro 12.3-inch at Amazon
"Powerful and sure to last you a while."
Best Chromebook:
ASUS Chromebook 12.5-inch convertible at Amazon
"Chromebooks are an inexpensive and convenient alternative to Windows machines."
Best Looking:
Samsung Galaxy TabPro at Amazon
"Stylish, whether it's in a coffee shop or a board room."
Best Midrange:
ASUS Transformer Book T300 at Amazon
"A lightweight laptop as well as a tablet, the Transformer is great for many scenarios." 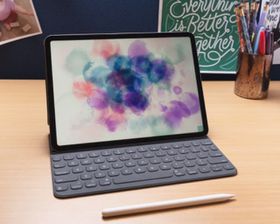 One of the key innovators of tablets, it makes sense that Apple's iPad Pro also happens to be the best tablet for general use out there. The 12.9-inch Liquid Retina display looks as good as you'd expect from an Apple product, displaying colors sharper and brighter than most. An edge-to-edge bezel means there's hardly any wasted space on the device.

The Pro utilizes an A12X Bionic chip, which is an enhanced version of anything Apple has used for its smartphones or tablets before, with a Neural Engine continuing to do some fancy work behind the scenes. It has a 12MP (megapixel) back camera along with a 7MP front camera for selfies and FaceTime. There's FaceID support along with Apple Pay as well. Completing the package, the tablet also has four speakers for superior sound.

There's also no forgetting the advantages of iOS; with a simple-to-use operating system, it's one that many people are used to by now, and that's ideal if you already have an Apple product like an iPhone or MacBook. That's thanks to features like AirDrop working neatly between the two products, as well as potentially already owning apps via the Apple App Store.

Expect battery life to be about 10 hours, which is on a par with most other high-end tablets of similar spec.

The Pro 12 12.2-inch packs a lot in for a low price. It has a 1.3GHz Quad-Core processor, 2GB RAM, and 64GB Flash Storage (it's also possible to expand the storage via MicroSD cards). That's on top of its 12.2-inch display that has a standard resolution of 1920 x 1200 pixels. The system uses an Android-based operating system so if you can navigate your way around your Android smartphone, you're good to go here, too. And if you haven't already used Android? It doesn't take long to figure out, it's very simple and has a clean user interface.

It works like other 2-in-1 tablets/laptops, allowing you to use its supplied full-width keyboard to type or switch over to the tablet screen for touch-based activities, but admittedly that's as far as it goes in terms of fancy features. For instance, the cameras aren't the best out there, being 8MP / 2MP, but it makes sense in a budget device that's aimed squarely at enabling you to work without breaking the bank. Expect a battery life of about eight hours which should see you through most of the working day.

Predictably, for the best Windows experience, you can't go wrong with a Microsoft-based product. The Surface Pro 6 offers a 12.3-inch screen, Intel i5 processor, 8GB RAM, and 128GB SSD. It might not sound like the mightiest of combinations but the Surface Pro 6 works admirably fast via Windows 10 Home. It has a battery life of up to 13.5 hours when watching videos, which means you won't have to worry about charging it halfway through the day.

It's also incredibly lightweight and slim, weighing only about 1.7 pounds. It's the little touches that make the Surface Pro 6 nice, such as its built-in Kickstand which is perfect for small presentations, propping it up to watch a video, or sketching away with the separately bundled Microsoft Surface Pen. It's a great addition that gives you the best of both worlds, being able to switch to a slimline laptop or simply use it as a conventional tablet.

The Samsung Galaxy Book is a TV fanatic's best friend; you can use it to watch up to 11 hours of video playback on a single charge then it'll happily fully recharge in less than three hours via Samsung's Adaptive Fast Charging technology. That makes it a dream for entertainment purposes, especially that long weekend Netflix binge.

The tablet looks fantastic thanks to its Super AMOLED touchscreen with an impressive resolution of 2160 x 1440 pixels. The quality of its display is exactly what you would expect from a company also well known for its TV screens. Other specs include a 2.5GHz Intel Core i5 processor, 8GB RAM, and 256GB SSD. There are also two USB-C ports for connecting it to other devices.

It uses Windows 10 as its operating system and rarely misses a beat while doing the most average tasks. You can easily connect it to your Samsung smartphone, too, with the option to share files wirelessly and effortlessly. That's a particular advantage if you're already part of the Samsung ecosystem. Weighing about 1.6 pounds, it's a neat little device that offers a lot more power than you'd think. Plus, there's the all-important ability to switch between tablet or keyboard, too.

Huawei typically does a great job of providing well-made products at lower prices than more common household brand names. That's certainly the case with the Huawei MateBook 12-inch. The device has a slightly older Intel Core i5 1.2GHz processor, being the 7th generation rather than 8th, but it still works well enough for us to recommend wholeheartedly. It comes with 8GB RAM, and a 256GB SSD hard drive. Its screen offers a resolution of up to 2160 x 1440 pixels with narrow bezels ensuring you can get to grips with it in both tablet and laptop form.

Extra features come in the form of a keyboard that has an automatic backlight, along with an encrypted chip that allows for fingerprint authentication. The latter is always particularly useful when dealing with portable devices, and a much-welcomed addition. Besides having Windows 10 installed, there's also one year of Microsoft 365 bundled in which sets up those who work on the move perfectly.

The only significant issue comes from the battery life, which is a little poor at about six hours. That's a bit lower than other tablets, but most tablets aren't 2-in-1 devices with powerful specs and a 1440p resolution screen.

There are plenty of different Microsoft Surface devices out there and the Microsoft Surface Pro 12.3-inch is the most powerful of the bunch right now. It offers an Intel i7-7500U 1.6GHz Quad-Core processor, 8GB RAM, 256GB SSD, and a great touchscreen LCD display. The display has a resolution of 2736 x 1824 pixels and is super responsive with inputs and loading programs. It also has two cameras in the form of one 8MP rear-facing camera and a 5MP front-facing camera.

Alongside those specs is a high-quality full laptop keyboard, whisper quiet fanless cooling, and a Micro card reader that supports SD (secure digital), SDHC (secure digital high capacity), and SDCX (secure digital extended capacity). It also weighs only 1.7 pounds and is a mere 0.3 inches thick when closed. That means it's perfect for taking it on the go.

So, it's extra fortunate that its battery life is a respectable eight hours, ensuring you won't run out of juice during the working day. It's a powerful system that's just right for the flexible user who wants both tablet and laptop without feeling like they're having to compromise on speed or power.

Chromebooks are a great alternative from the usual Windows path that 2-in-1 tablets often follow, and the ASUS Chromebook 12.5-inch convertible is our favorite pick. It has an Intel Core M3 processor, 4GB RAM, and 64GB Flash Storage. Being a Chromebook means this system runs smoothly and efficiently with a focus on using Google Apps like Google Drive and Google Docs to supplement the system's limitations. The 12.5-inch screen is full-HD and has a resolution of 1920 x 1080 pixels. It's easy to switch between laptop and tablet mode, too, ensuring this is a versatile device.

It only weighs about 2.65 pounds, which might not be the lightest 2-in-1 out there, but it's still hardly an issue. Its sleek aluminum metal body looks good, too. The best part? It takes mere seconds to start up and its battery lasts about 10 hours so you're good to go all day long. You might need to think a little differently about what software you can run (given this isn't Windows) but if you simply need to work within the cloud a lot, this is a very appealing package.

The Samsung Galaxy TabPro has one huge thing going for it: that beautiful screen. Again, this is a Samsung device with a Super AMOLED display and it shows. It looks stunning and far superior to most other devices, thanks to its resolution of 2160 x 1440 pixels.

Elsewhere, it uses an Intel Core M3 processor which is a little slower than some but it still does a competent job. There's also 8GB RAM along with a 256GB SSD. The device only weighs about 1.5 pounds and it's 0.2 inches thin. That makes its battery life of 10 hours all the more remarkable as there's not a lot of space here for a large battery. It looks good, too, and while the keyboard isn't quite as satisfying to type on as other 2-in-1s, it's so lightweight and easy to carry around that you'll forgive it.

The Asus Transformer Book T300 is a dependable midrange 2-in-1 device. It uses an Intel Core M Processor, 4GB RAM, and 128GB SSD hard drive. The 12.5-inch display utilizes up to 1920 x 1080 pixel resolution, bringing it up to the standard you'd expect of a display of this size.

There's only one camera, a front-facing one, and it's only 2MP but it does the job for when you need to make quick conference calls. That's the only real flaw in an otherwise respectable midrange device. It has a battery life of about eight hours, offers unlimited cloud storage for a year via ASUS WebStorage, and there's even support for the ASUS Active Stylus Pen if you'd rather manipulate the screen with a stylus than your finger. Just factor in the extra expenditure if that's what you want to do.

It's super thin, too, measuring only 0.6 inches when closed and 0.3 inches with the keyboard detached. Plus, it weighs a just three pounds. It comes with Windows 8.1 pre-installed, but you can upgrade to Windows 10 if needed.

You can read more about Windows 10 as an operating system here.