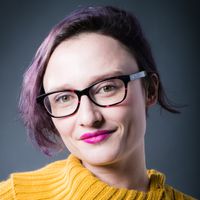 When Eve started playing Call of Duty six years ago and first spoke into her headset, she was inundated by harassment almost immediately. She didn’t realize she’d committed a fatal error by revealing that she was a she.

"At first I was really appalled. I thought ‘are they joking?'"said Eve, who did not want to reveal her last name because she prefers to keep her personal and gaming lives separate. "I thought they were kidding. But then, seeing them do it over and over again, I realized, 'oh no this is an actual mentality. People think this way.'"

"We want to show that, yes, we can compete at a high level among ourselves and with the guys."

Many young women have been in Eve’s place. Via in-game chat or headsets, anonymous male players often harass or belittle women, who tend to be outnumbered. The underlying message is usually the same: girls don’t belong in gaming.

But Eve, now 24, didn’t quit. The harassment hasn’t stopped, but resilient, competitive female players like her are finding solutions to maintain their passion. On Sept. 5, Eve will compete under the name "Cute Noob" in a qualifier for an all-women’s Valorant tournament, set to take place on Sept. 12. Registration for the qualifier is still open for interested gamers.

The qualifier will be streamed on Sept. 5 at 6:15 ET via Nerd Street Gamer’s Twitch. The tournament on Sept. 12, however, is available to viewers by invitation only.

The tournament is hosted by Nerd Street Gamers and Spectacor Gaming, a division of Comcast NBCUniversal. Eight all-female teams from North America will compete for a $10,000 prize.

"My hope is that esports one day gets to a point that an all-female tournament isn’t needed to bring positivity to that community," said Paige Funk, senior director of marketing at Nerd Street Gamers. "I hope that they continue to be hosted in terms of fellowship and camaraderie, but I hope that esports gets to a point where the toxicity is eliminated."

The Sept. 12 tournament, called the For The Women (FTW) Summer Showdown, will be the largest all-women’s esports event to feature Valorant, a first-person shooter game released in June this year. Other popular all-female esports events include Intel Challenge Katowice in Poland, which was canceled for undisclosed reasons, DreamHack, which took place online in July, and the GirlGamer Esports Festival, which hosted a tournament in Dubai in February.

Due to COVID-19, the For The Women Summer Showdown will take place entirely online.

Yet, some experts argue that a full-on culture change is needed before esports and gaming can be truly inclusive. For one, prize money for all-women’s tournaments is typically tens of thousands of dollars lower than it is for tournaments dominated by men.

Misogyny is a notorious plague not only for players, but within the video game industry as well. Recent employee allegations of harassment by top gaming executives have spurred some movement, but The New York Times reported in July that the overall culture within gaming hasn’t improved much since GamerGate in 2014, when women were issued death threats for critiquing the rampant toxicity.

"I realized, 'oh no this is an actual mentality. People think this way.'"

Funk argued that creating a friendly atmosphere for women players is a top-down imperative. She shared a story from when she was a fairly new employee at Nerd Street Gamers, when she was tasked with overseeing the company’s Instagram account.

"I saw a comment from somebody. It was on the fence. It was right on the line of misogyny. I wavered and asked myself, 'Do we just let this go?'" she said. "I asked my boss, and he said 'take it down. We do not put up with that to any degree.' That set the precedent for Nerd Street Gamers, and it had to come from leadership. Anything that makes employees even remotely uncomfortable, it’s gone."

Eve hopes that Saturday’s qualifier and the For The Women Summer Showdown will inspire girls to push past the negativity and become the players they were meant to be.

"We need to keep having these competitions in order to allow younger generations to feel safe, and to visualize a group of women who are in a high state of game play," Eve said. "We want to show that, yes, we can compete at a high level among ourselves and with the guys."