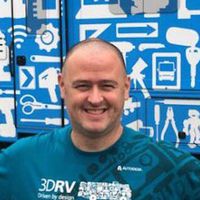 You can do your 3D printing work anywhere. There are apps for 3D printing that work on Android and iOS as well as desktops and laptops, and some that you don't even need to download.

With a 3D printer app, you can view files on the go, design when you need to, convert images from 2D to 3D files, and more.

Whether you need to work on your 3D projects while you're in the office, away from your desk, or at home, these are the coolest apps to check out.

If you're looking for 3D printing ideas or if you need to upload a recent creation, MakerBot’s Thingiverse app lets you access the Thingiverse through your Android device. The app also lets you add things to your collection and send them to the MakerBot app for instant printing.

GCodeSimulator is an app that lets you look at your 3D prints and simulate printing them to check for errors before you actually send them to your printer. The simulation can be performed in real-time (taking as long as it would take your printer) or in fast forward mode. Similarly, GCodeInfo analyzes your print-ready file and provides information about the file from the number of layers to the estimated print time.

3D Print Cost Calculator is a nifty app that calculates not only the overall length of your filament spool but also the approximate cost to print your project. You input the material, filament diameter, spool weight, spool cost, and length of print in mm; it does all the math for you. If the built-in app within your 3D printer environment (the software/interface that came with it) doesn't do this automatically, this app is your solution.

To model 3D objects on your device, ModelAN3DPro offers many options, including importing saved OBJ files and sharing screenshots. This 3D printer app for Android is compatible with 3D phones and supports real 3D visualization.

The eDrawings app is a mobile 3D image viewer with some unique features. There is an iOS and Android version, but the iOS edition offers augmented reality so that you can see the 3D image in your environment using your phone's camera. There are also extended professional versions that provide cross-sectioning, measurements, and the ability to send your marked file in an email to others.

Makerbot offers an iOS app specifically for its 3D printer. With this app, you can monitor, prepare, print, pause, and cancel printing from your smartphone. If you need to approve and print on the go, this app will be a time-saving addition to your design process.

For the small business with more than one 3D printer, BotQueue is a mobile way to queue print jobs to multiple printers and control printing wherever you are. It was designed so that you can make the most of all your 3D printers. It requires installation on a computer (Mac or Linux) before you can use its mobile capabilities.

There are few free desktop-based apps for 3D printing. Meshmixer is one that lets you not only model a new object from scratch but also combine two or more 3D objects. It runs on Windows and Mac.

There are, however, several good apps that are web-based for those who prefer a larger screen when designing. Most of these are related to modeling, but they all have unique benefits that will help you realize your 3D designs.

Tinkercad is an online 3D design modeling app. There's nothing to download except your creations, which you can export to formats ready for 3D printing like OBJ or STL, or SVG for laser cutting.

You can also print directly to your 3D printer with Tinkercad since the web app supports MakerBot, Polar Cloud, Treatstock, Voodoo, and more. Some other features include PNG exporting and sending the 3D design to Autodesk Fusion 360 and 3D communities.

Tinkercad has absorbed apps that used to go by other names, like 3DTin, 123D Sculpt, 123D Catch, and Modio.

Parametric Parts is a 3D design app that works on parameters. This open source service gives you access to other parts upon which you can build your own designs.

If you have a 2D sketch that you'd like to make into a 3D object, you can use Shapeways. Upload your image in black and then set the thickness in gray on their website. You can then have them print your design in any of their 3D print materials, including ceramics, sandstone, and metals.

Disarming Corruptor is an interesting Mac app that lets you encrypt your 3D designs before sending them. The receiver must have the encryption code and the app in order to view the file without corruption.

Another web-based drawing app is SketchUp. You can browse 3D designs made by other users and import them directly into your own project to manipulate or use however you wish. This 3D printer app is also available for download.